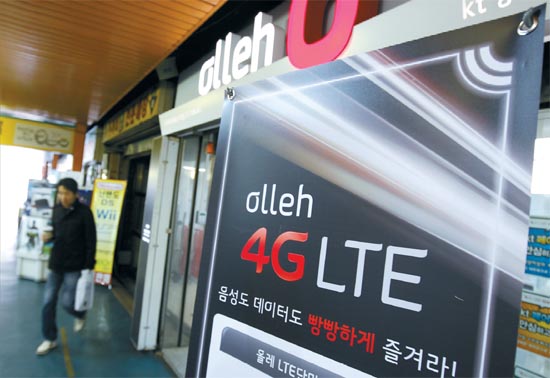 A KT retailer in downtown Seoul displays an advertisement for a fourth-generation (4G) mobile service. KT had planned to shut its second-generation network down on Wednesday at midnight before a Seoul court blocked the move. [YONHAP]


KT plans to follow the example set by the Korea Communications Commission (KCC) in appealing a court order blocking it from shutting down its second-generation (2G) mobile service, it said yesterday.

The country’s No. 2 mobile carrier reacted defiantly after the Seoul Administrative Court issued the preliminary injunction on Wednesday evening, just six hours before KT was due to become the first Korean mobile carrier to pull the plug on its 2G service.

But it was beaten to the punch by the country’s telecommunications regulator, which already appealed the ruling yesterday via law firm Yulchon, according to Yonhap News Agency.

“We will immediately appeal the court order so that the KCC’s approval of our plan to shut down the 2G service, a move we are pursuing to develop the telecom industry and for users’ convenience, can be executed as soon as possible,” KT said in a statement.

It previously attempted to cancel the service in April and July, but the KCC rejected the move, saying there were too many 2G users to ignore their interests.

However, it received a green light from the industry watchdog last month after having successfully reduced its 2G users to below 150,000, accounting for less than 1 percent of its total wireless subscribers.

Small though their number may have been, 1,000 of these united to file a class-action suit against the KCC on Nov. 30 to nullify the regulator’s approval, saying that KT used illegal means to reduce its 2G ranks and that KCC overlooked this.

“We have fully protected users’ rights,” KT countered, adding that “the court decision only temporarily delays the shutdown of the 2G network. It doesn’t call for the plan to be scrapped.”

KT declined to say when it will lodge the appeal, which will further delay the carrier’s rush to join the move over to fourth-generation (4G) technology.

SK Telecom and LG U+, the nation’s No. 1 and No. 3 mobile carriers, have already launched LTE service in July of this year. Short for long-term evolution, LTE is the type of 4G wireless communications technology that companies around the world are betting on.

Once it ends its 2G service, KT is hoping to use those dedicated networks to run a 4G service. While the company possesses other networks that fit the bill, relying on these would incur significant costs, as KT has already prepared all of its LTE equipment for the move, KT said.