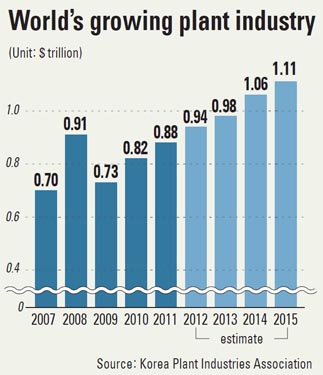 With Posco Engineering and Construction spearheading the movement, Korea’s plant builders are gaining attention as the global industry is expected to grow in years to come, mainly in central and Latin American countries and Asia.

Last month in the Chilean capital of Santiago, around 100 officials from Korea and the host country gathered at a five-star hotel to celebrate the completion of a coal-fired electrical power plant built in Antofagasta, a northern port city.

Posco won the $870 million order to build the plant in 2008. It can produce up to 520 megawatts of electricity, or enough to supply power to 400,000 four-member households for one year.

The company has been busy in the Latin American country in recent years, having successfully completed building an electrical power plant in the city of Ventanas in January of last year.

“We were able to receive consecutive plant orders, beating other global firms based on the trust we built [with Chile],” said Chung Dong-hwa, the company’s president, in his opening speech.

Posco said it helped cement its reputation for speed with the two projects. The first one beat its deadline by one month and the second one was finished on time - a feat in itself in an industry where delays are common.

Posco added that both plants were wrapped up relatively quickly compared to the time European builders usually take on such projects.

It said it strategically applied an earthquake-resistant design to the two plants. This, it claimed, will prevent them from collapsing in the event of another large earthquake like the 8.8-magnitude temblor that erupted off the coast of central Chile in February 2010.

As the world plant-building industry is expected to see healthy growth in the short-term, local firms see this as a golden opportunity to expand their presence and bring more foreign cash into the country. This in turn would give a fresh boost to annual trade, which earlier this week passed the $1 trillion milestone.

“The plant industry is rising as a higher value-added industry because it involves design, procurement and construction,” said an official from the Korea Plant Industries Association, noting that by 2015 the global plant market is likely to be worth $1.11 trillion.

The country has moved from its reliance on textiles decades ago to semiconductors, computers, automobiles, ships and petrochemical products, which ranked as Korea’s top five exports in the 1990s. At the turn of the millennium, IT emerged as the main source of exports, and the country’s trade soon reached $500 billion. This eventually steered the country into the elite $1 trillion trade club as its ninth member this month. But experts say more diversification is needed.