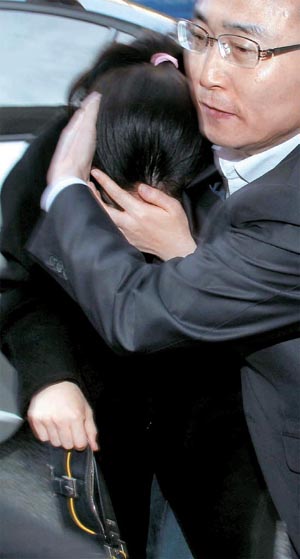 Sordid allegations of battery emerged yesterday after prosecutors requested an arrest warrant for the 49-year-old lawyer accused of bribing a former prosecutor, who was also his lover, to sway in his favor a lawsuit he had filed.

In addition to violating the Attorneys-at-Law Act for bribing the 36-year-old former prosecutor with a Mercedes, corporate credit card and Chanel purse, Choi has been charged with making a false accusation and illegally holding captive another woman with whom he was romantically involved.

The three were in a love triangle until the second lover, a 39-year-old college lecturer, reported the alleged corruption to authorities.

The special prosecution team conducting the seemingly ever-expanding probe said that Choi allegedly received 10 million won ($8,840) on Jan. 24 from the college lecturer to bribe high-ranking prosecutors after she was accused in December 2010 of stealing 34 pieces of high-end clothing from a 56-year-old woman.

“We’ve secured Choi’s bank transaction records as evidence,” a prosecutor said. “We confirmed that a portion of the check, 7 million won, was wired to his corporate bank account, and we’re trying to track down whether the rest of the money was used for bribing.”

Prosecutors yesterday said that Choi and the college lecturer’s relationship soon soured because Choi continued to demand more money over the past year.

In July, their relationship came to an end after the college lecturer refused to lend him more money, prosecutors said. In retaliation, Choi allegedly forced her into his car, locked the doors and assaulted her several times. He is also suspected of beating the college lecturer in March and May.

Choi, meanwhile, has denied all allegations, telling prosecutors that he received the 10 million won as a retainer as her lawyer in the theft case.

On Wednesday, the prosecutors secured an arrest warrant for the former prosecutor, surnamed Lee, on charges of accepting bribes from Choi.