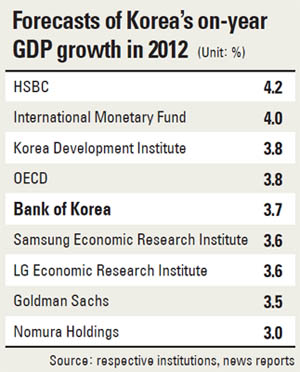 The Bank of Korea revised down its forecast for the nation’s economic growth next year to 3.7 percent from a 4.6 percent estimate in June.

With this, the central bank joins a long list of local and multinational public and private institutions that have slashed their growth forecasts for 2012 as Korea’s trade-dependent economy continues to be impacted by the euro zone debt crisis and a global slowdown.

As the economic contraction is expected to be most painfully felt in the country in the first half of 2012, the BOK predicted that corporate investments will also shrink over the next 12 months.

Meanwhile, it said the annual inflation rate will remain at the upper end of its target band this year, despite its recent decision to exclude gold rings from the consumer price index in a last-ditch effort to lower the rate below 4 percent.

The BOK cut its economic growth estimate for 2011 to 3.8 percent in annualized terms, and 3.7 percent for 2012. If realized, the latter would rank as the slowest rate since a 0.3 percent expansion tallied in 2009.

Asia’s fourth-largest economy is projected to expand by a healthier 4.2 percent in 2013.

The central bank also downwardly revised its inflation forecast for next year to 3.3 percent from an earlier estimate of 3.4 percent, citing easing raw material costs. But the projection for this year’s inflation rate was kept at 4 percent, the ceiling of the BOK’s target band of 2 percent to 4 percent.

“There is a chance that exports by volume could shrink in the fourth quarter, and this trend may continue into the first quarter of 2012,” Lee Sang-woo, director general of the BOK’s research department, said at a press conference.

The BOK said quarterly growth is likely to bottom out at 0.7 percent in the January to March period, but recover in the second half as Europe comes to grips with its debt problems.

The BOK official said the potential impact of next year’s parliamentary and presidential elections in Korea were reflected in its revised forecasts for growth and inflation.

“Downside risks to growth outweighed upward risks. The BOK’s 2012 growth forecast cannot be viewed as conservative as the growth outlook can still be revised down further,” Lee added.

The bank’s growth estimate is largely in line with forecasts made by private think tanks and international organizations, which universally agreed that Korea will grow below 4 percent next year.

The revision came one day after the BOK froze the key rate at 3.25 percent for the sixth straight month due to downside risks from the euro zone.

Europe’s travails and weakening growth in major economies are raising the level of global economic uncertainty and casting doubts over how far Korea can manage its finances amid the pinch.

Domestic demand remained stagnant in the third quarter as households were reluctant to spend money because of economic uncertainty and high inflation, giving policy makers cause for concern about the vitality of the economy.

According to the BOK, exports, which account for about 50 percent of the Korean economy, are forecast to expand 5 percent next year, slowing from an estimated 11.6 percent expansion rate for this year.

Private spending is expected to grow 3.2 percent in 2012 after gaining 2.5 percent this year.

More positively, investments in construction are projected to gain 2.8 percent, compared with a previous estimate that they would experience a 5.3 percent contraction for this year.

Facility investment is expected to advance 4.2 percent, down from an anticipated 4.5 percent this year.