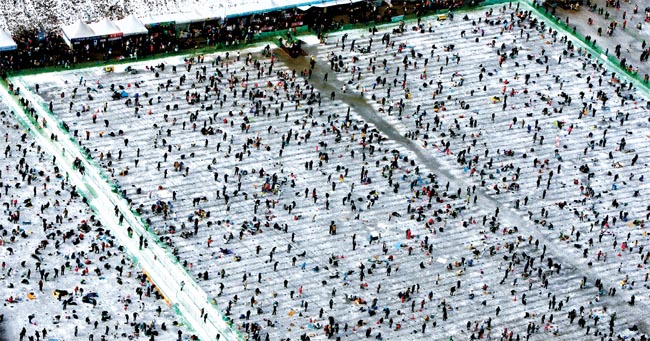 The main focus of the Hwacheon Sancheoneo Ice Festival is catching sancheoneo or mountain trout. About 10,000 people enjoy ice fishing on the frozen Hwacheon River. But safety is guaranteed because the festival organizer allows just 10,000 anglers a day. [JoongAng Ilbo]


The sleepy small town of Hwacheon, Gangwon with about 20,000 residents turns into a fierce battlefield between gill-bearing aquatic animals and two-legged fish hunters who are armed with fishing gear when the temperate drops below zero.

Along the frozen Hwacheon River, about 10,000 anglers, from young boys to seniors in their 60s and 70s, peer through openings in the ice with the hope of catching sancheoneo (mountain trout) as part of the Hwacheon Sancheoneo Ice Festival. The mountain trout disappear under 40 centimeters of ice when it gets cold.

This annual ritual resembles a scene from the children’s book “Where’s Waldo?” which depicts hundreds of people doing a variety of different things at the same location. This mass group of people fighting off cabin fever in the middle of the winter even caught the attention of CNN.com earlier this month.

The online version of the news channel reported on “seven wonders of winter” including the Korean festival. The other six wonders include the northern lights in Canada, reindeer migration in Sweden and Yellowstone’s boiling geysers in the United States.

There is still a month to go before the annual Hwacheon festival but it was indeed good news for the festival organizer. The festival, which has risen as a successful one among hundreds of other local festivals, was canceled last year due to widespread foot-and-mouth disease, causing more than 50 billion won ($43.5 million) of loss. It was a huge blow to the festival.

That’s the reason the festival organizer is all set to greet more visitors this year with newly added attractions and upgraded convenient facilities.

With the catchphrase “Unfrozen Hearts, Unforgettable Memories” this year, the 9th festival provides about 40 different outdoor activities that are related to ice and snow from Jan. 7-29. Most of its programs stay the same as in previous years, but the festival has added more information booths and installed two new attractions, including snow sled boats and a zip-line where people pass over the whole festival area which is about 66,115 square meters (16.3 acres).

“We had just one main information booth but it was a hassle for visitors to come and go between festival areas and the central information booth,” said Lee Bo-ram, an official at the festival organizing committee. “So there will be three more small information booths starting this year and the newly added attractions will be loved by many fun seekers, I guess,” she added. 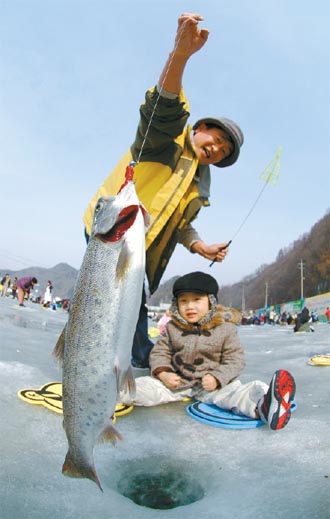 Sancheoneo is a type of trout which dwells in fresh water. When the temperature dips below zero, the fish disappears under 40 centimeters of ice.

Of many different types of outdoor activities, the main focus of the festival is ice fishing. If you decide to beat the winter blues by getting to Hwacheon this winter, the first thing you have to do is reserve your ice opening by Internet in advance. Online reservation opens on Dec. 20 at www.narafestival.com/01_icenara_2012/. The organizer said 5,000 ice openings are available online everyday.

“Ice fishing is the most popular activity among others. So you need to make a reservation if you plan to visit the festival on weekends,” said Lee.

The admission fee for adults is 12,000 won ($10) for ice fishing and 8,000 won for children under 13 and foreigners. Children and foreign participants will have their own designated fishing spaces.

Ice openings are prepared by the festival organizer but the individual participant should bring their own tools. Smaller fishing rods such as gyeonjidae are better than longer ones, according to the festival organizer. These tools are available from nearby fishing shops for about 3,000 won.

Even if you fail to secure your own ice opening, the festival organizer provides 6,000 more ice openings on the spot everyday.

There is also another fishing program - bait fishing. Bait fishing costs the same as ice fishing and lures are used.

Catching sancheoneo with your bare hands is another popular program, which is free of charge. The activity is run on a first-come, first-served basis. An individual participant who catches three sancheoneo first becomes a winner but it’s far harder than you imagine. Since the same shirts and pants without pockets are given to participants as uniforms, participants need to carry caught fish within their clothes but the energetic and slippery fish often get away.

You could bring your sancheoneo home but you can taste the fish which dwells in clean water on the spot. Bring the fish to one of three barbecue places within the fishing venue. For 1,000 won per fish, they’re grilled and served. 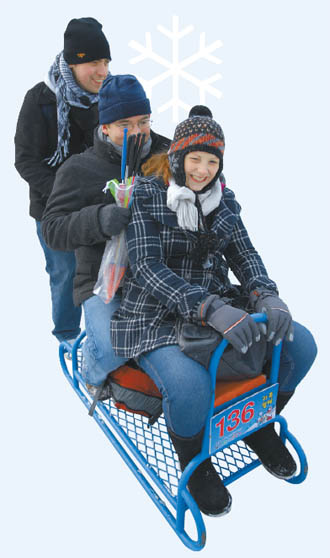 The main focus of the ice festival is fishing but the festival is more like a general theme park that is based on ice and snow. Diverse attractions such as bobsleigh, ice and snow sledding, skating, ice hockey and snow football are available. Some of them are free of charge but some of them charge admission fees. A singe ride to most attractions starts from 5,000 won.

There are also many things to enjoy for those who prefer calmer activities. World Snow Love Square is where hundreds of different snowmen are displayed, which is a great area for photos. A huge snow sculpture town is another attraction. Once you enter into a long and huge ice tunnel, you will encounter every imaginable ice sculpture. When the sun goes down, lights go on and it creates another beautiful view.

An array of paper lights, made with about 17,000 different sancheoneo shapes, will be decorated along about 5 kilometers (3.1 miles) of street near the ice festival venue.

Craft shops open for people who are interested in making the sancheoneo light with hanji, or traditional Korean paper. The craft school is located in front of Hwacheon Information Industry High School. It costs 10,000 won to make a single sancheoneo and takes about 40 minutes. The school is full on weekends, you need to make a reservation in advance. Call 033-441-7573.

The creative sled competition is another fun event to watch. Anyone is allowed to participate in the competition by making up their own man-powered creative sleds but judges will deduct points from teams which use Styrofoam for the sake of the environment. Three judges including star author Lee Oisoo, who lives in Hwacheon, will pick about 10 teams based on creativity, technique and performance. For those who want to participate, visit the Web site and apply for the competition between Dec. 26 and Jan. 6. 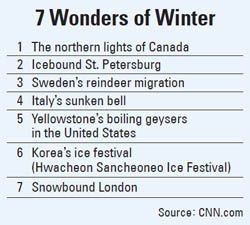 The festival has already gained fame among local Koreans but it is relatively unknown to non-Korean visitors compared to other community festivals such as the Boryeong Mud Festival. For this reason, the festival organizer tries to offer a foreigner-friendly environment. With cheaper admission fees and dedicated fishing places for non-Korean participants, there will be a shelter for them as well. Of course, there are three shelters where Koreans can warm up too.

The inaugural festival started with 22,000 visitors back in 2003 but the number soared to 1.3 million in seven years.

Hwacheon is 149 kilometers (92 miles) from Seoul, and takes about 2 hours and 40 minutes to reach by car.