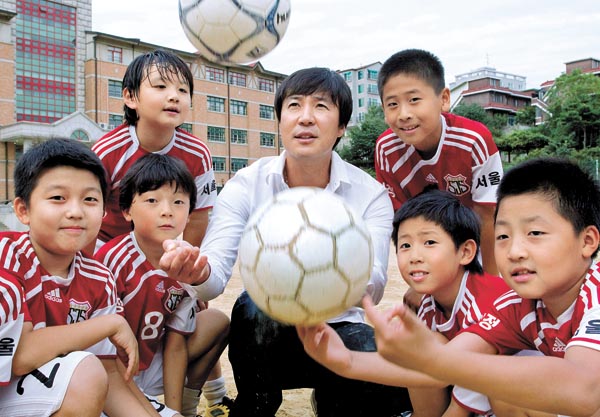 Members of the football team at Sinjeong Elementary School in western Seoul pose for a picture with their coach Ham Sang-heon, center. By Cho Yong-cheol


The glittering, exceptional plays of a local elementary school’s football team in Seoul was due not to tough training or nutritious diets, but to its own special secret: reading lots of books, as many as possible.

“Football players should read good books and have a variety of ideas for creative play on the ground,” said Han Sang-heon, the 40-year-old coach of the football team in Sinjeong Elementary School in western Seoul, which has won more than 100 nationwide and citywide football competitions.

The school, which has approximately 2,500 students and 80 classes, is the largest elementary school in Korea’s capital. Its football team was founded in 1984.

The team won this year’s spring and autumn nationwide football competitions for elementary pupils, as well as a local competition hosted by the Seoul Football Association on Nov. 26.

Sinjeong Elementary School is the only school in the country that runs six different football programs for students from the first to the sixth grades. Junior students learn how to enjoy football with basic skills and, when they become seniors, they practice difficult, high-level techniques step by step.

Ham, who used to be a professional football player, has led the team for 13 years. He employs special training methods that he had learned in the Netherlands.

However, the most distinctive method of the team is to urge players to read many books. Coach Ham launched a reading society in 2006 with parents who donated money for buying books for players.

Now, at the society’s room, hundreds of books are piled up and the coach is buying more, about 10 books per month.

After reading those books, players should post their essays on the club’s Web site and good writers receive gifts, such as a bag or a pair of football shoes. And the coach also uploads his feedback on the site, like how to write a good reading essay or avoid grammatical mistakes.

“Players who participate in the reading program become calm and express their opinions clearly,” Ham said.

That kind of attitude prevents players from losing his or her temper during the game and helps them communicate with teammates well, Ham added.

Ham said that his special method derived from his experiences in his youth. When he was a middle school student, he suffered from senior players’ assaults and violent orders, and frequently ran to the school’s rooftop to escape from them.

One day, he found a book there, titled “My Lime Orange Tree.” After reading it, he said that he was encouraged by its message, enough to face the reality in front of him.

He then began reading many kinds of books and started to understand different kinds of people in the world, which apparently helped his play.

Saying that he still reads more than 10 books monthly, the coach said, “I want to raise players that I can expect more from tomorrow than today.”