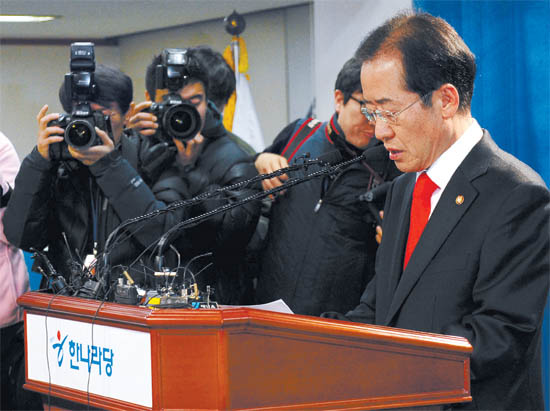 
Succumbing to growing calls for his resignation, Representative Hong Joon-pyo, chairman of the governing Grand National Party, announced yesterday he would step down to allow the troubled party to revamp itself under new leadership.

The resignation came just a day after he announced a series of major reform measures aimed at salvaging the sinking party, which were met with a chorus of criticism from reformist lawmakers within his own ranks who pressed for new leadership.

Hong’s departure could allow Representative Park Geun-hye, the former chairwoman and presidential contender, to fill the resulting power vacuum, though political observers said that it remained to be seen whether a Park leadership would help the ailing party and her Blue House ambitions.

Reading his resignation statement at a press conference held at GNP headquarters in Yeouido, Seoul, Hong struck an unapologetic tone but said he had concluded that he could no longer lead the party.

“I intended to resign after reforming the GNP in a way tantamount to creating a new party and cleaning house. However, as my pure intention was dismissed as my obsession with vested interests, I determined that it would be meaningless to continue standing in this position,” Hong said.

Many GNP members had become disenchanted with Hong, calling him too insensitive and inactive in the face of changing public sentiments in recent months that have put the party on the defensive, including October’s defeat in the Seoul mayoral by-election.

It was a short stint for Hong, who was elected GNP chairman at the party’s national convention on July 4. His critics said his gaffes as well as his failure to respond to the swirling scandal over the cyberattack on the National Election Commission allegedly orchestrated by an aide to a GNP lawmaker accelerated Hong’s demise.

At the press conference, Hong took responsibility for a series of incidents that shook the party but also expressed regret that his actions and words were dismissed as being for his benefit.

He then called for the unity of the party. “There should be no more factional and power struggles,” Hong said. “Only when we muster power together can we win the legislative and presidential elections.”

Park’s supporters say that she could wield strong leadership to resolve the party’s crisis, such as when the GNP, under Park’s helm, asked prosecutors to investigate a money-for-influence scandal involving two of its lawmakers in 2006. Hong, they say, missed the opportunity to take such pre-emptive measures to address the recent cyberattack scandal.

Hong’s departure could also pose a challenge to the Blue House as the new leadership could try to distance the party from the administration to counter criticism that the GNP acts as a rubber stamp for President Lee Myung-bak. Such a move could weaken Lee’s grip on power including over next year’s budget. On Thursday, the ruling and opposition parties agreed to a special session of the National Assembly next Monday to pass the budget.

“We hope the party will be quickly stabilized and use its strength to deal with pending issues that affect the public’s livelihood,” said Park Jeong-ha, Blue House spokesman.