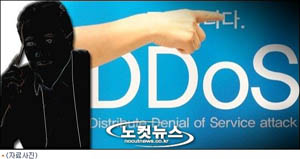 Police have concluded that the Oct. 26 by-election-day cyberattack was orchestrated solely by the 27-year-old driver of Grand National Party Representative Choi Ku-sik.

Gong is accused of committing the distributed denial-of-service (DDoS) attack that paralyzed the National Election Commission’s Web site for more than two hours on the morning of the by-election.

In a briefing yesterday, the National Police Agency said they had closed their investigation into the lawmaker’s aide, surnamed Gong.

“We didn’t have much time to uncover the entire truth because of complicated investigation procedures, such as requesting search warrants to raid suspects’ homes and getting permission to search phone records, within the time period allowed to us,” Hwang Un-ha, a National Police Agency official, said. “We definitely had difficulty figuring out the purpose of the crime and who was behind it.”

Under Korean law, police are required to wrap up their investigation and forward the case to prosecutors within 10 days of a suspect’s arrest, which they did yesterday.

Police have arrested five suspects in connection to the crime, including Gong, on charges of violating the Public Official Election Act.

According to police, on the eve of election day, Gong said he telephoned a friend from his hometown, surnamed Gang, to ask him to paralyze the Web sites of the NEC and then-candidate Park Won-soon. At the time, Gong was having drinks at a Seoul room salon with five other people, including an aide to National Assembly Speaker Park Hee-tae.

In the middle of the drinking session, Gong said he brought the speaker’s aide, surnamed Kim, outside the room salon and said to him, “Why don’t we strike the NEC’s Web site?”

Kim was said to have tried to dissuade Gong, saying, “No way. We would be arrested. [The attack] won’t help you at all.”

The NEC’s Web site was down for more than two hours, preventing voters from finding their polling stations. At the time, political analysts speculated that a lower voter turnout would help the ruling GNP.

“Gong confessed he was trying to lower the voter turnout by attacking the site and preventing access to it in order to help then-GNP nominee Na Kyung-won,” the police official said.

However, doubts remain high among some media outlets and opposition lawmakers that a 27-year-old ninth-level civil servant could commit such a grave crime alone, which experts say would cost millions of won.