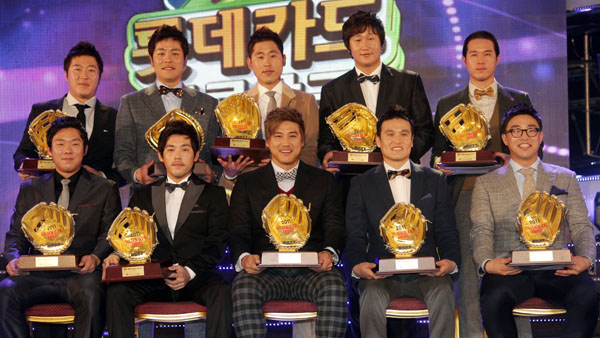 At the Seoul Trade Exhibition & Convention Center in southern Seoul yesterday, Choi received 286 of 306 votes from reporters and broadcasters, winning one of the three Golden Glove Awards allotted for outfielders. Busan Lotte Giants’ Son A-seop and Gwangju Kia Tigers’ Lee Yong-kyu were the other recipients in the category.

Choi led the KBO in home runs (30), RBI (118) and slugging percentage (.617), and was a candidate for this season’s MVP award. As the Lions’ cleanup hitter, he helped his club win the Korean Series and Asia Series.

Choi’s story in the KBO is one of second chances and persistence. He signed with the Lions as a catcher after graduating from Jeonju High School but was released in 2006 due to his poor performance. 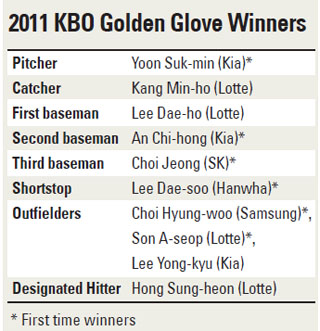 However, the lefty-hitter bounced back while playing for the Korean National Police Agency in the Futures League, the minor league of the KBO. He earned the “triple crown” - leading in batting average, RBI and home runs - in 2007 and was able to rejoin the Lions the following year.

Choi’s second chance with the team was a crucial component of the Lions’ title run. With this season’s award, Choi has now also ended the Lions’ three-year drought in the Golden Glove Awards. He was the only recipient representing the KBO champions.

“I had lot of twists and turns,” Choi said. “I started from the bottom and finally reached here.

“I’m always waiting for next season to come, and I don’t fear failure.”

Choi was not the only player to receive his maiden Golden Glove Award during yesterday’s ceremony. Daejeon Hanwha Eagles shortstop Lee Dae-soo beat out Lions shortstop Kim Sang-su by 16 votes, the smallest margin in any category, to win his first.

Like Choi, Lee went under the radar until his recent emergence. His KBO career began as an apprentice for the Incheon SK Wyverns in 2001, but he couldn’t feature regularly for the first team until 2006. After being traded to the Seoul Doosan Bears and the Eagles, the 30-year-old finally had his best performance of his career, ending the season with a .301 batting average and 50 RBI.

“I finally made my dream come true after 10 years,” a tearful Lee said during his acceptance speech. “I want my parents to feel happy at least for today.”

The Giants produced the most Golden Glove recipients at four, including their first baseman Lee Dae-ho, who will play with Japan’s Orix Buffaloes next season, and Hong Sung-heon, who is the first player to win the Golden Glove Award four consecutive years in the designated hitter category.