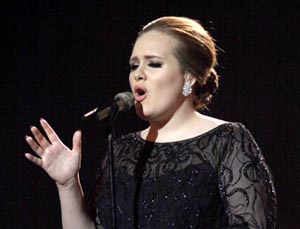 LOS ANGELES - Adele made Billboard history on Friday when she became the first female singer to be named top artist, have the top album, “21,” and score the top single, “Rolling in the Deep,” all in one year.

The 23-year-old was followed in the top artist group by Rihanna, Katy Perry and Lady Gaga in that order, followed by Nicki Minaj, Taylor Swift, Justin Bieber, Chris Brown, Lil Wayne and Bruno Mars. “I think one of the things that sets me apart from other artists who have had the same kind of success is that my life isn’t speculated about” by the media, Adele said in an interview with Billboard.

Tye Comer, editor of Billboard.com, attributed Adele’s success to her being a “breath of fresh air” in a market saturated with pop artists cut from a “certain cloth,” like Rihanna, Katy Perry and Lady Gaga.

“Her success is really inspiring because it shows that there is still room in the music industry for an artist to make it with true, raw talent,” Comer said.