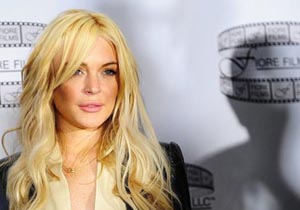 The actress, who was reportedly paid nearly $1 million for the magazine spread, appears on the cover seated on a bright red Playboy bunny chair, only just protecting her modesty.

“Hot. Hot. Hot,” tweeted Hefner, announcing that the next issue of the magazine will come out next week.

The leaked pictures show the curvy actress channeling Marilyn Monroe, flirting with the camera in a series of soft porn-style poses lying, kneeling or stretching herself voluptuously against red velvet drapery.

The actress had wanted $1 million for the Playboy spread and balked at an initial offer of $750,000 - but Hefner eventually made an offer near enough to $1 million to entice her, celebrity news Web site TMZ reported.

Lohan - once the promising child star of hit Disney movies “The Parent Trap” and “Freaky Friday” - has a reputation for hard partying and has faced a series of legal tangles over the years.