Six savings banks could be heading for guillotine

Six savings banks could be heading for guillotine 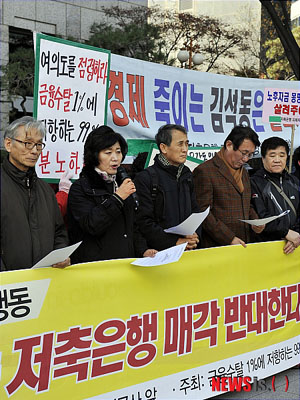 Scant news has emerged from the beleaguered savings bank sector since the last wave of suspensions were handed out in mid-September, but the lull might soon be over as six troubled savings banks face the end of their grace period this month.

These are among the 13 savings banks that failed to meet their capital-adequacy requirements during a sector-wide investigation conducted between July and September. The other seven, including industry No. 2 Tomato Savings Bank, were suspended, while these six were given a grace period to normalize their businesses.

The names of the six banks were not disclosed as regulators feared a possible bank run or more bad news for the ailing banks should the knowledge become public.

However, officials at the Financial Services Commission said yesterday that the banks’ grace period will expire at the end of this month and penalties could follow.

The regulator has been looking into whether the banks properly disclosed their third-quarter performances. It also checked to make sure they pursued the measures they vowed to follow to normalize their operations. The probe is due to wrap up this week.

The savings banks reportedly promised to create capital increases by selling assets such as buildings or subsidiaries, but have not been able to follow through on all accounts.

“Even if [the savings banks] have not been able to sell their assets, the grace period can be extended if they can provide evidence that such deals are pending,” said an FSC official.

The watchdog is expected to order additional “problematic” savings banks to come up with plans to normalize their operations. Tougher penalties, including possible suspensions of business, may be imposed on players found to have issued new bad loans or committed irregularities, sources said.

Korea has been striving to shake up the troubled sector as savings banks have been suffering from deteriorating asset quality due to unrecoverable property loans.

Deciding the fate of the six savings banks will be the final step in the FSC’s yearlong bid to normalize the ailing sector since it inspected 85 such banks, with the main focus being their debt situations and capital adequacy ratios as stipulated by the Bank for International Settlements.

Regulators suspended 16 savings banks this year to wipe out 25 trillion won ($22.15 billion) in assets from the sector.