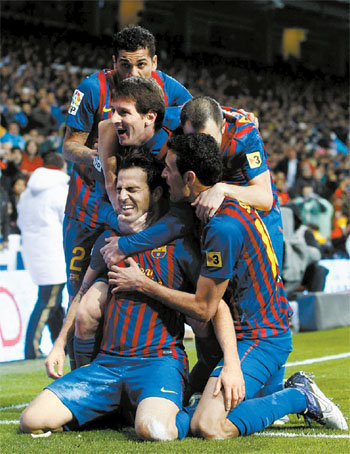 MADRID - Barcelona overcame conceding one of the fastest goals in “El Clasico” history to win 3-1 at Real Madrid on Saturday, ending its arch rival’s 15-match winning run and moving ahead in the Spanish league title race.

Barcelona was behind after just 21 seconds, but recovered to move above Madrid on goal difference atop the Spanish league standings.

“We were superior to Madrid,’’ said Barcelona midfielder Xavi. “We’ve been faithful to our philosophy, keeping hold of the ball and we were superior.’’

But Lionel Messi ripped open the Madrid defense to provide the equalizer for Alexis Sanchez on the half-hour mark and Xavi marked his 600th game for Barcelona with a deflected shot for the lead in the 53rd.

Cesc Fabregas headed in the third at the back post in the 66th.

“We should have had more control of the game, but to win here you have to play a very good game and that’s what we did,’’ said Barcelona coach Pep Guardiola, whose voice was hoarse in the post-match press conference.

Madrid coach Jose Mourinho said luck played a part in his team’s loss and described his players as “sad but calm.’’

“Luck has made the difference a bit,’’ Mourinho said. “But that’s a consequence of how football is. I don’t want to take anything away from the winning team.’’

Mourinho used Mesut Oezil alongside Lassana Diarra and Xabi Alonso in central midfield, with Benzema and Cristiano Ronaldo up front.

“I decided to play that way because we were playing at home and we wanted to win,’’ Mourinho said.

“I’m delighted with the performance we gave,’’ Guardiola said. “We controlled the game, we controlled their counter attacks and we created the chances necessary to win.’’

As expected, Madrid’s players started the game at breakneck speed, but it was a simple mistake by Valdes that presented the home side with the quickfire opening goal.

The Barcelona goalkeeper shanked his attempted clearance straight to Angel Di Maria and the ball eventually found its way to Benzema who smashed into the roof of the net.

That goal, timed at 21 seconds, is believed to be the fastest in clasico history and only the fifth between the teams in the first minute of play.