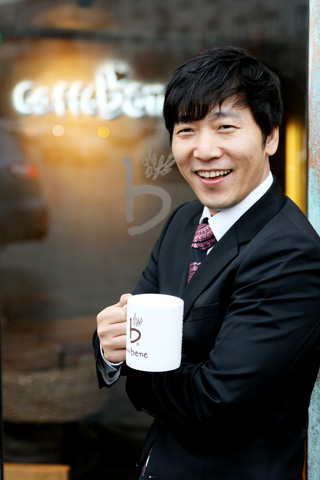 Caffe Bene CEO Kim Sun-kwon lives by nine golden rules, which he claims have helped him survive and prosper amid a saturated industry and economic pinch that have caused many independent coffee shops to fall by the wayside in their relentless pursuit of profit.

“My secret weapon sits in a small frame on my desk,” said the 43-year-old. “It contains the nine promises I made to myself. The first one reads, ‘Survival comes first, before moving to grow the company to a 1 trillion won [$886 million] firm.” When Kim launched his coffee chain in Korea in 2008, many industry observers and coffee lovers were skeptical about its chances of succeeding in the market given the dominance enjoyed by chains such as Starbucks and Coffee Bean & Tea Leaf.

However by last year, Caffe Bene had emerged as a serious rival. Although it raked in less than 50 percent of Starbucks’ annual sales - 105 billion won compared to 240 billion won - it has become the biggest coffee chain in the country in terms of presence after opening its 720th franchised store.

Unlike major foreign coffee chains which are directly managed by local conglomerates like Shinsegae, which co-owns all Starbucks franchises, Caffe Bene gives its “partners” the opportunity to be fully independent. Kim said this has become a successful model because baby boomers, or people born just after the 1950-53 Korean War, are starting to retire now, and many see starting their own coffee business as a viable source of income.

He also said it was important to pay attention to store design and create a friendly working environment for customers, which is why he insists on having laptops and Apple desktops available that people can use for free, as well as a plethora of electric sockets for those with mobile devices.

Kim’s rags-to-riches tale has also attracted people’s attention as he came from humble beginnings and saw his fried chicken restaurant start-up collapse in just six months. Undaunted, he launched a successful video arcade business and a franchise restaurant specializing in gamjatang (Korean pork and potato stew) before switching his attention to the coffee business.

Q. Why do you say that hardship has been a driving force in your success?

A. I was the seventh of nine children born to a family in Jangseong, South Jeolla. My father passed away when I was seven. We were so poor that water seeped through the ceiling of our house whenever it rained. Because we couldn’t afford to get it repaired, we had to run strings from the roof so the water would collect and drop into buckets below. I never saw anyone else as poor as us, and this made me feel very frustrated about things. When I was a young boy, I used to dream of taking good care of my mother as soon as I was able to. Starting this year, [Caffe Bene] began providing 100,000 won to employees’ parents’ bank accounts every month, as part of the company’s new welfare policy. This was something I had dreamed of implementing for a long time. So my point is that the process of struggling and experiencing hardship made me even more desperate to achieve my dreams.

Is having a dream enough to succeed?

Many people dream of success, but very few people act on this. I started selling goods after buying them in bulk at wholesale stores when I was in my early 20s. At the start of every year, I would sell bokjori [a traditional token of good tidings] because I could sell the leftover items a month or so later at Lunar New Year.

When you opened Caffe Bene in 2008, weren’t you intimidated by all the foreign competition?

Everyone around me tried to stop me, and I agonized over the matter. But on the other side, I was confident [that it would work]. This was the year when many baby boomers were starting to retire. While many retirees with assets want to start their own businesses, existing coffee chains were operated directly by conglomerates. I thought we needed a market to target such retirees.

Lots of your customers tend to stay in the store for hours on end but buy only a single cup of coffee. Is this model really sustainable?

That’s our competitive edge. All Caffe Bene stores have personal computers, and 90 percent lend laptops to customers who don’t have one. As such, Caffe Bene is like a library for those who hit the books. It’s also a romantic place for couples to come and spend time together. It’s hard to gauge the financial gains of this by looking at the numbers alone, but we certainly don’t suffer any losses. We also welcome lots of groups of businesspeople who leave the store after having a 30-minute meeting that involves several cups of coffee.

What do you say to critics who claim that Caffe Bene’s coffee isn’t as tasty as its rivals?

I’m confident that our coffee beans are among the world’s best in terms of quality. What is lacking is the number of skilled baristas. They aren’t trained well enough due to the speed with which we have increased the number of our stores. [To improve the taste of our coffee,] we regularly send 40 professional coffee brewers from our headquarters to each of the stores to provide training.