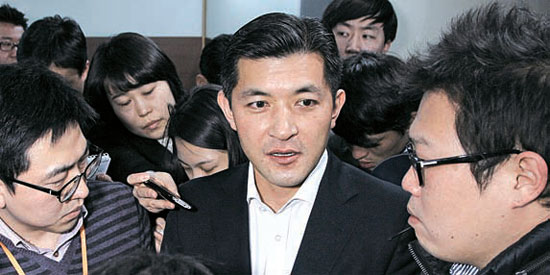 The ruling Grand National Party is in turmoil as its lawmakers began detaching themselves from it and announcing their decisions to stay away from next year’s legislative elections.

Representative Hong Jung-wook, a first-term lawmaker of the GNP, held a press conference yesterday and announced he will not seek re-election in the April 11 elections, for which candidate registrations will begin tomorrow and go through March 21. During the press conference, Hong said his four years as a lawmaker were a “concatenation of disappointments and frustration” and added that his “wisdom and capability fell far short to set the party and the National Assembly right.”

Hong told reporters after the press conference that he “felt responsible for the Korea-U.S. free trade agreement.”

After calling for a negotiated agreement between the ruling party and the opposition parties on the ratification of the Korea-U.S. free trade agreement, Hong had earlier said he wouldn’t run for re-election if his party provoked violence by railroading through the ratification with its majority in the National Assembly. Hong did not attend the plenary session at the end of last month when the GNP railroaded through the FTA and the opposition responded with violence.

Hong is a member of a group formed by 22 reform-minded first-term lawmakers of the GNP to “set the National Assembly right.” The group issued a manifesto late last year promising not to get involved with any activity that would provoke violence in the legislature, and vowing not to run again if they did.

Hong was the first to drop out among the ruling party’s reformists, but may not be the last. Hong said that he did not convey his intention to drop out to other reformists and added that he “respects whatever decisions the other members make.”

Adding to the ailing party’s woes, GNP Rep. Lee Sang-deuk, an elder brother of President Lee Myung-bak, also announced yesterday that he will not run in April’s general election and will retire from politics. Lee’s decision came shortly after the arrest of his senior aide, surnamed Park, after being accused of accepting about 700 million won ($619,000) in cash and an expensive watch as bribes from a local businessman who is a key figure in a high-profile, illegal lobbying scandal involving SLS Group Chairman Lee Kuk-chul.

At the press conference, Lee apologized for the worry he had caused the public concerning his aide and the “shameful act.” He also said, “The Grand National Party is currently in a very difficult situation. At such a time, unity will be the only way to overcome the difficulties.”

He added, “I hope my decision today will act as a grain of wheat that will bring a new beginning to the Grand National Party.”

According to Yonhap, the sources said, “Na’s decision is a political one following her defeat in the by-election,” and added that “she expressed her intention officially, in the meantime, as the resignation issue hasn’t yet been concluded.”

Na will be the fifth of the five elected Supreme Council members to resign. Chairman of the GNP Hong Joon-pyo announced his resignation on Friday.

After her defeat in the Oct. 26 Seoul mayoral by-election, Na said she would accept her defeat and hasn’t been attending any party meetings.

The party is also reviewing a contingency plan to allow former chairwoman Park Geun-hye to head an emergency council.