3 charged in AREX accident that killed 5

3 charged in AREX accident that killed 5 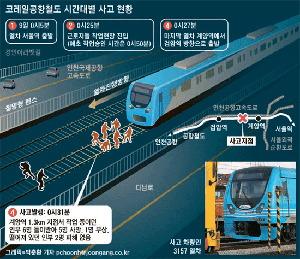 Three people involved in the Korea Airport Railroad accident that killed five maintenance workers have been charged with manslaughter, the police announced yesterday.

The Incheon Gyeyang Police said the 39-year-old driver of the Airport Express train that ran over the workers, the 55-year-old supervisor of the Korail Tech track maintenance operation and the 57-year-old head of the Korail Tech Incheon branch have been booked without detention for causing the death and injury of workers through negligence during duty.

Six workers who were repairing tracks and spraying them with antifreeze near Gyeyang Station were hit by an Incheon International Airport-bound train on Friday at 12:31 a.m., the last train of the day. Five were killed immediately and one worker was seriously injured. Two managed to escape the oncoming train.

One of the survivors had told police they started their maintenance work 25 minutes earlier than scheduled because of the cold weather.