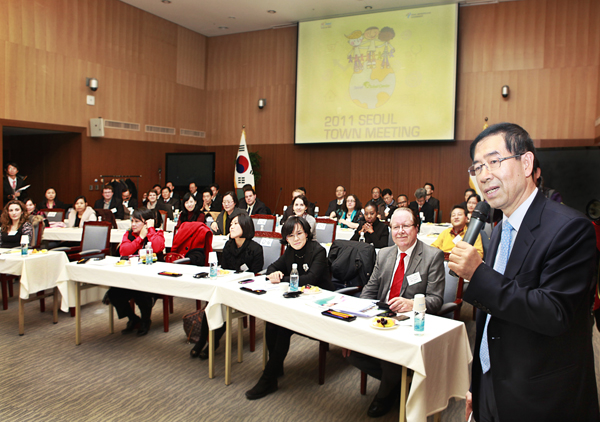 
The Seoul Metropolitan Government hosted their annual Seoul Town Meeting for expatriates, and lots of complaints were aired about living in Seoul.

The meeting, held in a conference room at City Hall on frisday at 4:00 p.m., was the 13th, and about 100 expats from the United States, Mongolia, Vietnam, the Philippines and other countries attended. The meeting was broadcast live on the Internet and through Twitter and Facebook.

Jasmine Lee, who starred in the 2011 movie “Wandeugi,” which described a multiethnic family in Korea, was the master of ceremonies.

Mayor Park Won-soon said in a opening speech, “I think the best way to find solutions for problems is listening to the diverse opinions of the people who are actually suffering them.”

Alan Timblick, the head of the agency, gave a progress report on policies for expats, saying that 17 of 76 suggestions were accepted to alter the city government’s policies in the last five years. He said recommendations by expats from past years’ meetings were already implemented or were in the process of being implemented.

“From expats’ suggestions, the ordinance that bans smoking in public areas such as Seoul Plaza and Namsan Park was enacted,” Timblick said.

The city government said it had collected questions and complaints from expats prior to the meeting and education was one the most important issues. Stinging criticism and complains about various education policies were made by expats and people from multiethnic families.

Hideku Yamaguchi from Japan said that learning materials in Korean schools are too expensive and the education was too focused on preparing for the College Scholastic Ability Test. She requested the government enable schools to buy learning materials in bulk so students could get them at a discount.

Some participants said schools in Korea should be more open with their information, especially on tuition.

“I thought there were no scholarship programs for foreign students in Korea because I couldn’t find any information on Web sites,” a student from Kazakhstan attending Korea University said. “I think Korean schools need to operate more transparently.”

Many participants said that students from multiethnic families are treated differently at school and that the treatment is the worst for children with parents from developing countries. They said the government should try to minimize discrimination in schools and encourage Koreans to learn about other cultures and respect them.

Kang Seon-seup, the director of the Seoul Metropolitan Government’s foreign residents’ assistance department, said the SMG will communicate more with schools and related organizations to come up with solutions.

The comment that drew the most applause from the audience was that the government isn’t very successful in regulating delivery men driving their motorbikes on pedestrian sidewalks.

“The government should not only fine drivers but also their employers,” said Gregory Brooks, a professor at Yonsei University.

“I think the meeting was very valuable,” Mayor Park said. “I expect these valuable opinions from expats will help promote better living circumstances so that everyone can live happily in this beautiful city regardless of race, religion or nationality.”