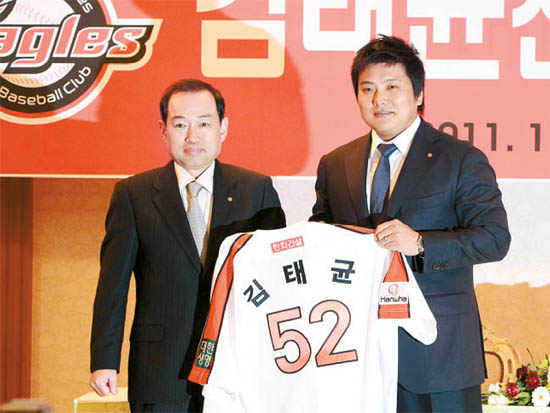 Kim will return to the Korea Baseball Organization after a brief stint with the Chiba Lotte Marines in Japan’s Nippon Professional Baseball.

“It is a very generous deal for me,” Kim said at the press conference in Daejeon. “I will have more responsibility and will perform like the highest-paid player.”

After winning the Japan Series in his first season with the club, the first baseman’s NPB career was marred by a series of injuries that led to early termination of his Marines contract.

However, Kim suffered a series of injuries and went through a slump this year, hitting just one home run and 14 RBI in 36 games. Weighed down by the guilt of his poor performance, Kim decided to terminate his contract with the Marines.

The two sides reached an agreement in July and nullified the final year of Kim’s three-year contact that was worth 150 million yen.

After terminating his contract, Kim frequently said to local media that next season he will play for his hometown Eagles, the team he spent nine seasons with before moving to Japan.

“During two years in Japan, I always trained hard,” Kim said. “I did hurt my back, but with rehabilitation and enough rest it’s 100 percent recovered.”

The Eagles had also previously announced that they were interested in reuniting with Kim next season and vowed to offer up a blockbuster deal. Hanwha Group Chairman Kim Seung-youn, who is also the owner of the Eagles, promised fans during his visit to Seoul’s Jamsil Baseball Stadium in August that he would bring the player to Daejeon next season.

Kim is considered one of the finest sluggers in KBO history. The right-handed batter was the KBO Rookie of the Year in 2001 and won the Golden Glove Award as a first baseman. In 2008, he topped the league in home runs (31) and slugging percentage (.622), also receiving his second Golden Glove Award. During his nine KBO seasons, he had a career batting average of .310, 1.091 hits and had at least 20 homers in six of those seasons.

Kim also represented Korea at the World Baseball Classic in 2006 and 2009. He featured in the 2010 Guangzhou Asian Games to help the nation to win the gold medal.