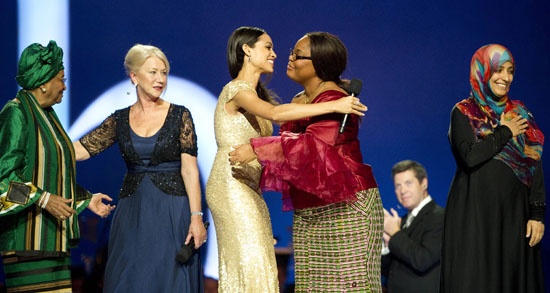 OSLO - British actress Helen Mirren (second from left in the photo), hailed this year’s Nobel Peace Prize awarded to three women (first, fourth and fifth from left) as historic, but said Sunday it’s shameful that so few women have won the award since its was created in 1901.

Mirren said the award marks an “extraordinary moment in the history of women,” but that it is “slightly shameful statistically that only 12 women have won it in more than 100 years, when you think how important women historically have always been, specifically in terms of peace.”

She spoke to The Associated Press before the Nobel Peace Prize concert in Oslo on Sunday, which she hosted with actress Rosario Dawson (third from left in photo).

The concert honored this year’s peace prize winners Liberian President Ellen Johnson Sirleaf and women’s right activist Leymah Gbowee, also of Liberia, and democracy activist Tawakkul Karman of Yemen. Together, the three have boosted the number of women who have received the peace prize from 12 to 15.

Mirren said this year’s award is a historic moment, “but it is only a step on a journey that women are taking, and hopefully in 20-30 years time we will be looking at a very different scenario.” She also said she has “witnessed first hand” the struggle of women in Uganda.

“In my personal experience, wherever there was a force for the positive, for creativity, it was almost always led by women and they are doing it with no recognition and under very difficult circumstances,” she said.

Mirren also pointed out that the three winners all come from small grass-root movements.

“It is so important for all of us to realize that these movements start in very, very small ways,” she said, adding that it is important for young women to have role models like this year’s Peace Prize winners.