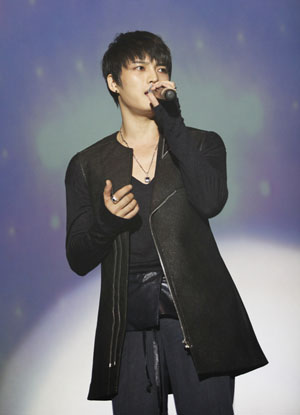 The event was held at Shanghai International Gymnastics Center and despite the venue’s seating capacity of 4,000, tickets sold out on the day of release. More than 1,000 fans who missed out on the tickets lined the streets outside to greet the singer-turned-actor. Upon arrival at Shanghai Airport, the entertainer had to be escorted through the VIP passage due to some 1,000 fans crowding the arrival area to catch a glimpse of Kim.

Kim’s agency CJes Entertainment said the singer/actor’s popularity increased due to his role in the SBS drama “Protect the Boss.” The agency claims that requests to host fan meetings are being proposed all over the world in areas that broadcast the drama. At the Shanghai fan meeting, Kim talked to fans about life behind the scenes and sang the song “I’ll Protect You” from the OST, which the singer wrote the lyrics to.

In response to the turn out, Kim said, “I know I have a tremendous fan base in China and I’m only sorry I can’t visit as often as I’d like. Despite my long absence, I’m so thankful that the fans have shown me so much love and support.” Kim also said he will aspire to become a better singer and actor and on Dec. 11 used his Twitter account to say, “See you again Shanghai.”