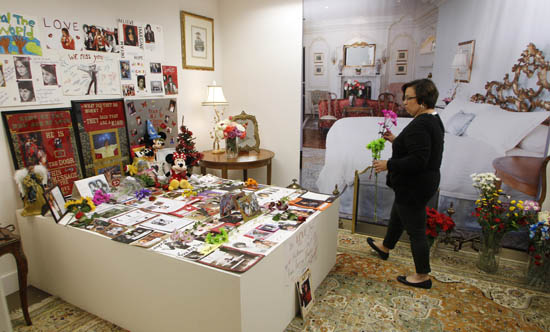 BEVERLY HILLS, California - Karen Jackson and Kiki Stafford were moved to tears as they walked among the items that surrounded Michael Jackson in his final days: a Victorian baby grand piano, a wooden armoire where Jackson had written a note to himself, a chalkboard where his children inscribed the message, “I love daddy.” Jackson, 57, and Stafford, 47, were among dozens of fans who got an early look at items that will be sold at auction from the singer’s final home - and left behind tributes to the King of Pop.

Julien’s Auctions announced last month that it would sell the contents of the sprawling home where the singer died in 2009. On Sunday, the company invited Jackson fans to preview its exhibit of the home’s art and furnishings before it opens to the public Monday. Fans were also invited to leave pictures, cards, flowers, notes and other items that will be delivered to the Jackson family.

“This means a lot, because we don’t have a place to go” to leave things for the family, said Christine Tucker, spokeswoman for the Official Michael Jackson Fans of Southern California. About 25 members of the fan club spent the weekend making and delivering glitter-covered cards and handmade Christmas ornaments for the tribute at Julien’s Auctions. “He inspires us to create. We make these beautiful things and we want his kids and his mom to see it,” she said.

Darren Julien, president of Julien’s Auctions, said he sought permission from the Jackson estate to include fans in the auction exhibit, and family matriarch Katherine Jackson requested that he deliver any handmade items from fans to her.

Julien’s Auctions sold the contents of Jackson’s Neverland Ranch in April 2009. It also sold Jackson’s “Thriller” jacket for $1.8 million over the summer and his signature spangled glove for $350,000 in 2009.