Canadian volleyball player hits his stride on and off the court

Canadian volleyball player hits his stride on and off the court 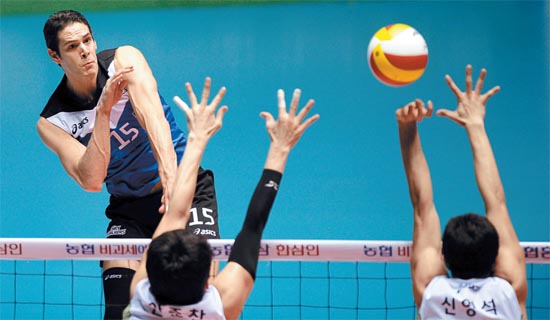 Dallas Soonias of the Cheonan Hyundai Capital Skywalkers, left, spikes the ball against the Seoul Dream Six during their V-League match at Jangchung Gymnasium in central Seoul on Dec.6. [NEWSIS]


When Dallas Soonias signed with the Cheonan Hyundai Capital Skywalkers this season, fans wondered how he would do against Gavin Schmitt, his teammate in Canada. Though he struggled in the early part of the season, Soonias has since transformed himself into a formidable player who is finally moving out of Schmitt’s shadow to make his mark on the court.

Schmitt, who currently plays for the Daejeon Samsung Fire Bluefangs, has ruled the Korea Professional Volleyball League for the past two seasons, taking MVP awards while lifting his team to the championships. He’s been so tough to beat that teams scrambled to bring in foreign athletes to challenge him. The Incheon Korean Air Jumbos, last season’s runner-up, signed Slovakian Martin Nemec, Suwon Kepco 45 signed Andjelko Cuk, who once played with the Bluefangs, and Gumi LIG Insurance Greaters chose Milan Pepic.

The Skywalkers brought in Soonias hoping that his experience with Schmitt would give him an advantage and help propel the team to victory over its long-time rival.

While on the Canadian national team, both competed for the right side hitter position, a fact that may have helped fan expectations that Soonias would be a match for Schmitt.

But while Schmitt raked up 37 points per match in the first six games of the season, Soonias struggled, averaging only 23 points per match. The Skywalkers, which haven’t missed a championship series since the V-League started in 2005, dropped to fifth in the first round. The team lacked coordination, and Soonias didn’t seem to be working well with his teammates. Some Skywalkers fans even complained that the team had picked the wrong athlete.

In terms of performance, Soonias improved beyond expectations. He averaged 29.67 points per match with an attacking success rate of 58.82 percent in the second round, an increase of almost six percent from the previous round. More impressive were his blocking skills. The 203 centimeter (6 feet 8 inches) tall player topped the blocking in the second round with an average of 0.91 per set, up 0.549 from the first round.

With those numbers, Soonias was voted the second-round MVP in the V-League last Friday, finally putting down the criticism he’d received.

Soonias was born in Saskatoon, Saskatchewan, Canada, in 1984 and is of Oji-Cree descent. In 2005, he won the Tom Longboat Award, which is given to the top First Nations athletes in Canada.

He began his professional career with Poland’s Jadar Radom in 2006 and played in France, Russia, Spain, Turkey and the United Arab Emirates before coming to Korea in September.

Since his arrival, Soonias, whose name means “coin money” in Cree, has won over fans. His hard work and dedication have been as much of a draw as his dashing smile and victory dances, while his activity on Twitter (@soonias) has also earned him a loyal following.

Last week, the Korea JoongAng Daily sat down with Soonias at the Skywalkers’ gym in Yongin, Gyeonggi, to talk about playing volleyball and his life in Korea.


Q. It’s been almost three months since your arrival. How are things going so far? 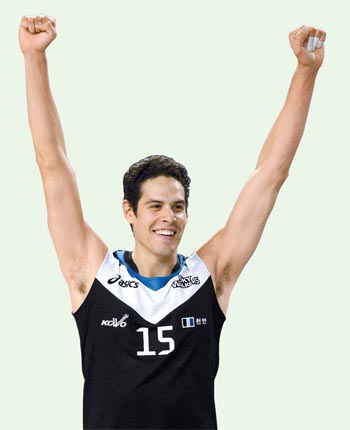 A. I recently broke up with my girlfriend, who I’d been dating for about a year and a half. It’s tough, being here, to maintain a long distance relationship. Love is a scary thing. [Laughs.] But my team and my teammates take good care of me. They understand foreign players have a different style.

What brought you to Korea?

It was a league that I could have success in, and I saw the league getting better every year. I could have played in Korea five years ago, but none of the teams would give me a trial until this year. Schmitt told me good things about the league, and I watched a video of the league in action. It looked like a very exciting country to play volleyball.

What things have been difficult about living in Korea?

Probably most foreign players will tell you that the biggest difference between playing in Europe and playing in Korea is the lack of free time. Here you live in a dorm, while in Europe you go home after practice. People take good care of us, but sometimes it’s difficult to take your mind off of volleyball.

You’re playing better now than in round one. What’s changed?

It’s not just me, but all of our players were trying to find their rhythm in the first round. But now, we know what each other is going to do on the court. Now, we’re moving like one machine rather than six individuals.

In particular, your blocking has improved. How did you do that?

It took me a while to adjust to the team’s style, and I guess I was just lucky in the last few games. In Canada, we focus more on team blocking, but there’s more one-on-one blocking in Korea. I understand it’s because the style of attack is different here.

You played in six countries before coming here. Do you see different volleyball styles in Korea?

The defense in Korea is impressive, and players are very good at basic skills. There’s also more deception in the attacks, whereas in other countries, it’s mostly about power.

What about Korean fans? Are they also different?

In Poland when a team is struggling, fans get really upset and will yell in your face. In Korea, we started poorly, but I felt lot of support from fans, and I feel very thankful to them.

Some fans say that you’re not performing as a closer for the team. How would you respond to that?

You’re only as good as your last game, but I know that as a foreign player, I have a great deal of responsibility and it’s my job to put away the last ball of the game. I’ve missed some, and I’m going to miss more, but I know I will score more than I miss.

As a volleyball player, what are your strengths and weaknesses?

I don’t think that I really have one skill that I excel at, but at the same time, there’s nothing I’m really terrible at. I think of myself as a well-rounded player.

What do you think about the rivalry between you and Schmitt?

I know people want to make something of Schmitt and me, but I don’t think of him as a rival. Of course we are on separate teams, and we’re going to compete. But before the whistle blows and afterward, we are good friends.

How would you compare your playing styles?

I can definitely say he has more power than me, but I can also say I’m faster than him. Because when we played in France, we went go-karting, and I beat him every single time. He wasn’t even close. [Laughs.]

Have you always wanted to be a volleyball player?

I thought I could be a teacher, but I was always involved in sports. I was really lucky that my parents told me I could do anything I wanted as long as I tried. They gave me the option to play every sport. My brother and I played lot of basketball though.

Is it true that you started playing volleyball to attract girls?

You majored in philosophy. Do you have a life philosophy?

I studied philosophy because I just find it interesting. For the last two years, I’ve been following this quote: “If you walked out of bed today, had a job to go to, had a home to come back to and had people who care about you, the game is over and you’ve won.” It’s very simple.

What are your plans after you retire?

My father is lawyer, and he started an aboriginal law school. I want to start small colleges geared towards aboriginal sports. There are so many aboriginals living on reservations. When I have free time, I go there to have a volleyball camp, and I see a lot of potential athletes there. I hope these young aboriginals come and play their sport while getting educated at the same time. I know it’s a huge goal, and it will take a long time, but we’ll see.

- Nickname: Dal-soo, but prefers The Nutrition

- Favorite music: Any genre, except country