A DP leader gives up on re-election

A DP leader gives up on re-election 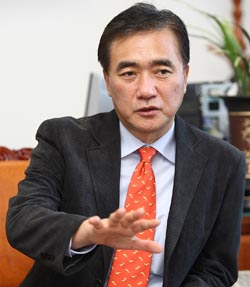 The opposition Democratic Party’s secretary general, Jung Jang-sun, announced yesterday he will not run in next year’s general election.

Joining a growing number of incumbent lawmakers distancing themselves from politics, Jung, a three-term lawmaker representing Pyeongtaek, Gyeonggi, held a press conference yesterday at the National Assembly and said he decided not to run because the chronic violence in the National Assembly was out of control.

“When the National Assembly fell into complete disorder with physical violence during the discussion of the budget for the four-rivers restoration project,” Jung said at a press conference, “I told myself that I would do my best to come up with an institutional measure to stop disappointing the public with the violence in the legislature. I promised that I wouldn’t run for re-election if such violence took place again.”

But more violence broke out over the ratification of the Korea-U.S. free trade agreement last month.

“I ran around trying to reach a negotiated agreement of the ratification, but it was passed in a surprise vote that even triggered a tear-gas attack,” Jung said.

He apologized to the public for failing to contribute much as a legislator despite serving three terms.

Candidate registrations for the April 11 general election began today and will go to March 21. There are concerns that more politicians will choose to sit the election out because of public displeasure with their recent performances.

Jung said he didn’t discuss his decision with DP Chairman Sohn Hak-kyu and only discussed it with his wife and a few close friends.