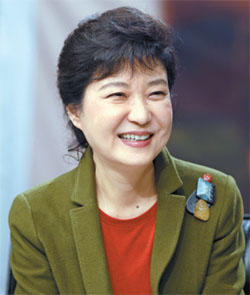 After a heated debate on how to salvage the sinking ruling Grand National Party, senior lawmakers and junior representatives agreed that former Chairwoman Park Geun-hye will be their emergency leader, but didn’t decide on the scope of her powers.

After the resignation of GNP chairman Hong Joon-pyo Friday, Grand National lawmakers held a caucus yesterday afternoon to find new direction for the party ahead of the April legislative election. Of the 169 lawmakers of the GNP, about 140 attended the meeting and the discussion continued into the evening with partial agreement.

While the participants agreed that Park, the GNP’s former chairwoman and its leading presidential candidate, should head an emergency leadership, Park supporters and reformists differed on how long she should lead and how much power she should be given.

At the end of the day, they said they would hold a lawmakers meeting Dec. 13 and national meeting of senior party members Dec. 16 to hash out a new constitution and new regulations, which will determine the scope of Park’s power.

Senior lawmakers, largely Park loyalists, argued that the Park leadership must have full power over party affairs, including the right to nominate candidates for the next legislative election.

Reformist lawmakers said the role of the emergency leadership under Park should be limited to revamping the image of the tattered ruling party.

“Park is the only one whom the people trust,” said Representative Yoon Sang-hyun, a Park loyalist. “The people want Park, so we should trust her and put her in charge of everything.”

He also promised that Park loyalists wouldn’t have a free ride in the nomination process, proposing the GNP to end the factionalism.

Representative Yoon Young, a member of the Lee Myung-bak faction that used to be in rivalry with Park’s group, agreed.

“If this was a baseball game, we’d be losing zero to six in the second half of the seventh inning,” he said. “Many pitchers have done their best, but they were all crushed. Park will be our last relief pitcher. Right now, what can a coach say? ‘Do whatever you want’ is all we can say. We should just give carte blanche to her.”

Reformists, however, rejected the idea, demanding that the GNP take decisive measures to completely scrub its image and redefine its identity. To this end, Park’s involvement should be limited to rescuing the party from the current crisis, they said, and she should not be given the power to choose candidates.

Representative Jeong Tae-keun said Park should abandon her vested interests in her own loyalists. He said a nomination committee should be created by recruiting outside experts.

Shortly before the caucus, Representative Chung Doo-un, a leader of the reformists, told journalists that the GNP needs something more than a simple change of top leaders.

“The situation is so grave that if we just change from Hong Joon-pyo to Park Geun-hye, it won’t show the people we have changed,” he said.

Earlier in the day, senior lawmakers held meetings to talk about the party’s fate. Of its 38 lawmakers with at least three terms under their belts, 29 attended a breakfast meeting.