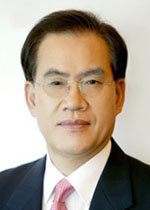 In a move to slow the plummeting popularity of his administration, President Lee Myung-bak yesterday named Ha Kum-loul, a veteran journalist and former head of a major broadcaster, as his new chief of staff.

Lee also named six other new presidential aides including a senior secretary in charge of job creation and a spokeswoman for the foreign media.

The reshuffle came after the ruling Grand National Party lost its leader in the aftermath of the October Seoul mayoral by-election defeat, the rowdy ratification of the Korea-U.S. free trade agreement and a series of scandals involving aides to the party’s senior lawmakers.

According to the Blue House, Ha, a 61-year-old former head of the Seoul Broadcasting System, will replace Yim Tae-hee, a former GNP lawmaker who has been serving as the chief of staff since July 2010.

“Ha is a veteran journalist who worked with Dong-A Broadcasting, the Korean Broadcasting System and Munhwa Broadcasting Corporation and served in key posts at the SBS, including its president,” the Blue House said in a press release. “We believe his flexible thinking and wide network built through a 36-year career makes him the best candidate to assist the president by conveying public sentiment, managing smooth relations with the National Assembly and completing key national agenda items.”

The Blue House said Ha is a man with drive, and his management performance as SBS president was highly praised. They said he is balanced and pragmatic. A native of South Gyeongsang who studied German language and literature at Korea University, Ha served as the broadcaster’s head from 2007-9. He is currently heading SBS Media Holdings, a subsidiary of the broadcaster, and is the chairman of the board of the TV network.

Noh Yun-hong, a technocrat currently heading the Korea Food and Drug Administration, was named as Lee’s new senior secretary for employment and welfare. His negotiating skills and administrative experience will help him oversee policies directly linked to the working classes, the Blue House said.

Chang Dasaro, secretary for executive planning and management, was promoted yesterday to serve as senior secretary for administrative affairs. Lee Dong-woo, who was in charge of policy coordination at the Blue House, will replace Chang.

Lee Mi-yon, a career diplomat, was named to be the president’s spokeswoman for foreign media.

Baek Yong-ho, chief of policy staff, tendered his resignation and the president will not fill the job, said Choe Guem-nak, senior secretary for public relations.