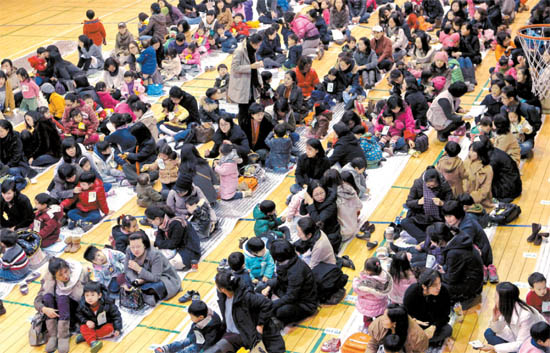 Children and parents wait in the Seoul Gyeongin Kindergarten in Mok-dong for enrollment by lottery yesterday. “Year of the Golden Pig” six-year-olds face stiff competition enrolling in kindergarten in 2012. By Ahn Seong-sik


“Newcomer Kindergarten Pupil Lottery” read a sign on a box filled with table tennis balls in a kindergarten located in Songpa District, Seoul, on Saturday. The lottery was for a spot in the incoming 2012 kindergarten class for six-year-olds, and 105 children competed for 16 spots. 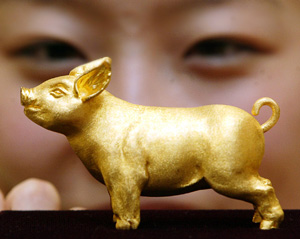 The kindergarten faculty running the lottery stated to the anxious parents, “It’s been 21 years since the kindergarten has been founded, and there has never been so many applicants. Please do not feel disappointed if you are not selected.”

As the lottery drawing began, either joy or sorrow rippled through the parents in the room depending on whether or not their children were selected.

The 60-year-old grandmother of a child who was not selected sighed and said, “If I knew this was going to happen, I would have asked my granddaughter who was born in December to be born a month later.”

Meanwhile, the 35-year-old mother of a kindergarten-bound child who was selected stated, “This is not a time to worry about whether the kindergarten is good or not.”

The reason for this excessive competition is due to a baby boom in 2007. In 2005, the number of births in Korea was 435,031 according to Statistics Korea. The birthrate peaked at 493,189 in 2007 before dropping again for the next two years.

The baby boom in 2007 is on account of it being the “Year of the Golden Pig,” the last of twelve animals to appear in the Chinese zodiac, and is associated with good fortune, especially monetary fortune.

A spike in births could be seen in 1958 and 1972, also years of the pig. Consequently, these babies now face extra competition with their year-mates beginning with entering kindergarten in 2012.

A parent surnamed Lee, 38, stated, “Because kindergartens have good facilities and children are taught by a licensed teacher, many parents try to switch their children from day care to kindergartens before entry into primary school.”

A parent living in Gangnam District expressed, “Because there are no spots in kindergartens, there is no choice but to send children to expensive private English-teaching institutes for kindergartners.”

When entering college or finding employment, they will face extremely high competition.” He also claimed that those born in years where there are a higher number of births have a higher rate of depression.