Police commissioner may hang up cap over bill

Police commissioner may hang up cap over bill 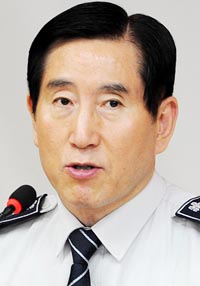 Cho Hyun-oh, commissioner of the National Police Agency, may put his job on the line if changes aren’t made to the Prime Minister’s Office’s draft ordinance on prosecutors’ control of criminal investigations by the police.

“If the presidential decree [on investigation powers by the police] is not amended, I may resign,” Cho said yesterday at a press conference at the National Police Agency in Migeun-dong, Seodaemun District, western Seoul. “If the police agency’s views are not reflected in the Prime Minister’s Office’s bill, I will not cling to the position as commissioner.”

At a meeting last week, the commissioner was more resolute. “If the [draft] presidential decree is not changed, I will give up my job,” he said. At a luncheon with reporters Dec. 7 following the resignation of Seongbuk Police investigative chief Park Dong-ju over the bill, he said, “If someone has to resign, it should be me.”

For the past half year, police and prosecutors have battled over their roles in criminal investigations. In June, the National Assembly passed a revised criminal procedure law which empowered police to open investigations on their own under the broad supervision of prosecutors.

But the bill released last month by the Prime Minister’s Office says that police can begin or close criminal investigations but will be required to submit reports and evidence to the prosecution if the investigation risks violating a suspect’s human rights.

The police have vehemently condemned the bill, saying it hampers their ability to investigate crimes and assumes they are human rights violators. It is slated to take effect Jan. 1.

A source from the police said, “With the backlash against the bill, Cho may not be able to stand before the angry police officers if he stays as commissioner.”

Meanwhile, Cho said that instead of running for office, which he has considered in the past, he now is considering academia or working on missions abroad if he is forced to resign.