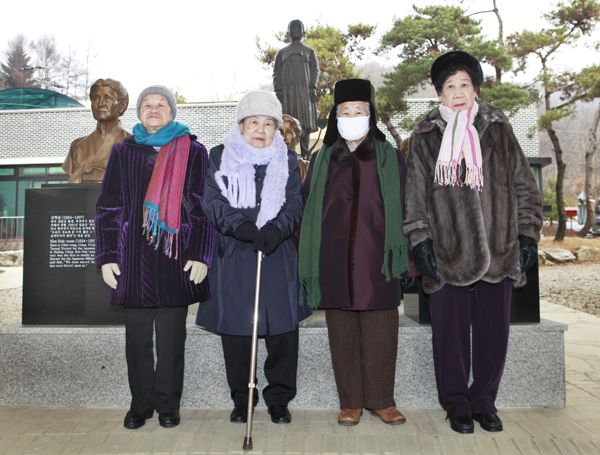 On a day she’ll never forget, Yi Ok-seon woke up in her small room in August 1945 expecting another day of the sexual torture she had endured for the previous three years.

But there was unusual silence outside her room. She walked out to the makeshift brothels lining the street and found all the men had disappeared. Japan had lost the war and her captors and tormentors had disappeared.

Yi let out a sigh of relief, which fast turned a sigh of despair.

“If they had taken us to there,” she recalls thinking, “they should have sent us home.” 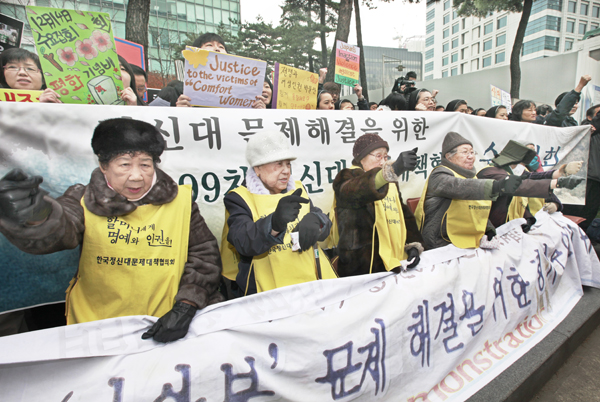 Yi was a forced sex slave in a so-called “comfort station” in Yanji, northeastern China. The Japanese military had kidnapped the Busan native in Ulsan in 1942 when she was 14 years old and brought her to Yanji.

She later learned that her Korean nationality was terminated because her parents, after years of unsuccessfully searching for her, reported her as dead. She was forced to live in China for the next 55 years.

“They were so irresponsible back then,” Yi says, who returned to Korea in 2000 and who is now 84. “And they are irresponsible still.”

On Wednesday, Yi will join other surviving sex slaves from the war to protest the lack of official remorse of the Japanese government outside its embassy in Jongno, central Seoul. For the past 20 years, a protest has been held there every Wednesday organized by the Korean Council for the Women Drafted for Military Sexual Slavery by Japan. This week’s will be the 1,000th demonstration, and the so-called “comfort women” and their supporters are hoping for maximum exposure and the greatest level of shame for Japan.

In March 2002, when the 500th demonstration was held, the protests went into the Guinness Book of World Records as the longest regular protest of a specific issue in the world. Each year has set a new record.

Yoon Mee-hyang, head of the Korean council, said the 1,000 protest milestone reflects the tenacity of the halmonis, the Korean word for grandmothers, and the total intransigence of Japan.

“The truth doesn’t go away no matter how ugly it is,” said Yoon, “and the Japanese government will realize it when the survivors and their supporters go out again during the 1,000th demonstration on Wednesday.”

During the hour-long weekly events, people from all walks of life - including farmers, nuns, monks and students - join the victims in calling for the Japanese government to acknowledge the crimes against the women, educate their own students about the wartime misdeeds, punish any responsible military officers who remain alive and above all to officially apologize and make reparations to the surviving victims.

For 20 years, it has been a losing battle. The Japanese government is deaf to the calls, claiming the 1965 Korea-Japan treaties that normalized relations between the two countries, exempts it from paying individual compensation for wrongdoings during its 1910-45 colonial rule of the Korean Peninsula, including issues that emerged later, such as that of the comfort women.

The Korean government has also been passive partly because of $300 million in aid and $500 million in loans the Park Chung Hee military regime received under the treaties.

“The Japanese government says everything has been settled with the treaties, which is not true, and the Korean government is not rebutting such an absurd claim,” said Kang Il-chul, 83, another former comfort woman.

The 1,000th demonstration is an attempt to give the moment more momentum. According to the organizers, human rights and civic groups in more than 20 countries will stage demonstrations supporting the comfort women this Wednesday. Yi and another former comfort woman will travel to New York and have a joint media conference with Holocaust survivors on Wednesday.

“I have heard there are still many people who don’t know about this issue and I am ready to give my account to the people there,” Yi said of the trip to New York. “I am neither afraid nor ashamed.”

According to the research by Jeong Jin-sung, a professor at Seoul National University, 50,000 to 200,000 women, some as young as 11 years old, were forced into sexual slavery by the Japanese military during World War II and over 80 percent of them were Korean.

The comfort women issue only came to prominence in the early 1990s when the victims mustered the courage to go public, encouraged by the supporters who told them the Japanese government should acknowledge the abuses.

Since Kim Hak-soon revealed her past as a comfort woman in August 1991, the first Korean to do so, a total of 234 Koreans have registered with the Korean government as former comfort women.

Human rights and women’s rights groups, led by the Korean council, brought the issue to the United Nations Human Rights Commission in 1992. The commission published reports in 1996 and 1998 advising the Japanese government to take such measures as giving legal reparations, punishing those responsible and issuing a formal apology.

Several countries joined to press Japan to address the issue starting with a U.S. House of Representative resolution in 2007, which urged Japan to “formally acknowledge, apologize and accept historical responsibility in a clear and unequivocal manner.” The Netherlands, Canada, Australia and the European Union followed suit in issuing similar resolutions.

The Korean government enacted a law giving financial aid to former comfort women in 1993. It says it has tried to resolve the issue with Japan diplomatically.

“At various bilateral meetings with Japan since the 1990s, we have delivered our message that the comfort women issue is not included in the 1965 treaties and needs resolution,” said an official of the Ministry of Foreign Affairs and Trade.

The Korean council sent a letter to the Japanese government in the early 1990s demanding an apology and reparations and received a short reply saying it would not respond to a demand from a Korean civic group.

Last Aug. 30, the Constitutional Court ordered the government to renegotiate with Japan using a clause in the 1965 settlement agreement that leaves room for negotiations. The court’s ruling was in response to a petition filed in 2006 by 109 comfort women, who claimed their rights to pursue happiness, guaranteed under the constitution, were violated by the government’s lack of efforts on the issue.

After the ruling, the Korean government established a task force under the Foreign Ministry to prepare for negotiations with Tokyo on the issue and the task force sent two letters to Japan suggesting bilateral talks. There has been no reply.

The task force also created a team of advisers comprised of legal experts or scholars on international affairs. The task force has had three meetings, including one held last Tuesday.

Lee Jang-hie, law professor at Hankuk University of Foreign Studies, who is one of the advisers, said Korea can consider bringing the issue to the Permanent Court of Arbitration in the Hague.

But Korean comfort women rejected the money because it came from private donations, not the government, and the Japanese government was avoiding responsibility for reparations. Former comfort women in Taiwan agreed with the Korean stance and the fund was actually wrapped up in 2007. Some compensation was given to victims in Holland and the Philippines.

“We want an apology from the Japanese government, not individual apologies, even if they come from the prime minister,” said Lee Sung-soon, president of the Korea Chongshindae’s Institute, another pro-comfort women group.

Some Japanese civic groups have acted in solidarity with the Korean comfort women. They arrange educational “peace tours” for Japanese in Korea. According to the House of Sharing in Gwangju, Gyeonggi, a shelter for comfort women, around 2,000 Japanese visit the facility on tours every year.

On Wednesday, Japanese civic groups plan a rally in Tokyo that will wrap the Japanese Ministry of Foreign Affairs building with a “human chain.”

The aging of the comfort women - there are only 65 survivors among those registered with the Korean government and most are 83 to 93 years old - is adding urgency to the movement to help them. This year, 14 former comfort women died and activists suspect the Japanese government is just stalling until they’re all gone and forgotten.

That is misjudgment on Japan’s part, says Kim Pan-soo, 73, one of the supporters at the 999th demonstration in front of the Japanese Embassy in Seoul last Wednesday.

A Peace Monument, made with 37 million won ($32,270) worth of donation, will be erected outside the Japanese embassy during the 1,000th protest. The monument, which includes a statue of a hanbok-clad Korean girl, will become a permanent demonstration site even when the survivors are gone, he said.

Tokyo doesn’t like the Peace Monument outside its embassy. Japan’s Chief Cabinet Secretary Osamu Fujimura said in a press conference in Tokyo Thursday that the Japanese government requested the Korean government stop the plan to erect the monument.