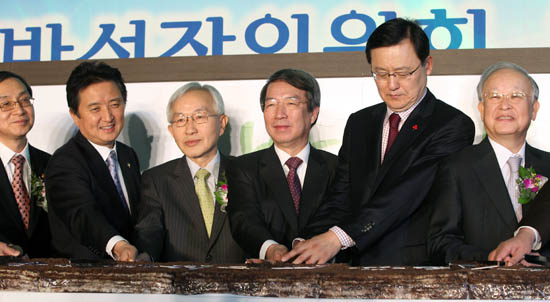 
A government commission failed yesterday to make a decision on its controversial plan that could force large companies to share profits with smaller contractors after protests from conglomerates.

The Commission on Shared Growth for Large and Small Companies said it decided to postpone a decision on the so-called “profit sharing” plan as nine conglomerate-appointed members of the 25-member panel didn’t attend its meeting in Yeouido, western Seoul, yesterday.

Yesterday, the commission also announced the third list of 40 product categories suitable for small- and medium-sized enterprises. The lists are intended to discourage large companies from making those goods. It includes box lunches and pickled radish. The list did not include desktop computers and other controversial items to which conglomerates objected. The commission’s first list had 16 items, and the second had 25.

The postponed decision on profit sharing came as the leading business advocacy group, the Federation of Korean Industries, accused the commission of trying to employ an “unproven scheme.” It warned Monday that the representatives from business on the commission would not attend the meeting and threatened they would boycott any vote on the issue until further discussions.

The rest of the commission members, however, agreed to decide by the year’s end whether to implement the controversial plan, according to the commission.

Yesterday was the commission’s one-year anniversary. The panel was created to make large companies treat its smaller suppliers and subcontractors better, part of the Lee Myung-bak administration’s “fair society” agenda.

Chung Un-chan, commission chairman and former prime minister, came up with the idea of sharing profits, and under the plan, large companies would voluntarily share what he called “excess profit” with their suppliers and contractors.

Unhappy with the absence of the conglomerate-appointed commission members, Chung lashed out at conglomerates, calling them “unchanging powers” in a speech he personally wrote. Chung read his own speech rather than a text originally prepared by the commission

In opening remarks, Chung said, “Now is when we most need sacrifice and responsible action from heads of large conglomerates, who are wielders of economic power that is not subject to election or replacement.”

He continued: “I know large companies’ passion and effort. However, it does not give the conglomerates total license. For the last one year, I came to the painful realization that it is easy to criticize the government but not large companies.

“They must keep in mind that the public is also closely watching the efforts of the president and government to ensure balanced growth,” he added.

Businesses, however, oppose the idea of sharing so-called excess profits. “No country in the world has a legal system that mandates profit sharing,” the FKI said Monday.