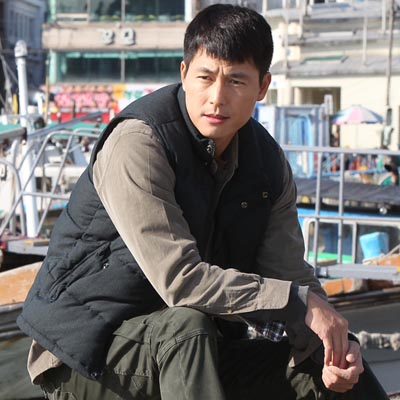 Jung Woo-sung steps outside of the dashing characters he usually plays to star as Yang Gang-chil, a man who has recently been released from jail after serving a 16-year sentence for a crime he didn’t commit, in the new JTBC drama series “Padam Padam.” [JoongAng Ilbo]

TONGYEONG, South Gyeongsang - When people think of actor Jung Woo-sung, they may think of a gentleman clad in an impeccable, crisp black suit who is perfect in every way. That’s maybe because of his smouldering good looks, but another reason is that Jung has played a skillful killer, a National Intelligence Service agent and a legendary martial arts expert.

But with his role in the new drama series “Padam Padam” on JTBC, Jung broadens the scope of his acting and ends up showing a very different side of himself.

In the drama, Jung plays Yang Gang-chil, a man who has recently been released from jail after serving a 16-year sentence for a crime he didn’t commit. When he gets out, he finds a changed world about which he knows nothing. Later, he meets Jeong Ji-na (Han Ji-min), a cold-hearted city girl who works as a veterinarian, and the drama unfolds around the unlikely pair.

Physically, Gang-chil is a scruffy guy whose hunched posture, worn plaid shirts and short pants couldn’t be more different from the well-kept appearance of many of Jung’s other characters.

The drama is written by television veteran Noh Hee-kyung. Noh is one of a few television writers to have consistently drawn positive reviews from critics and viewers. Her previous works include “Goodbye Solo” (2006) and “More Beautiful than a Flower” (2004).

The JoongAng Ilbo caught up with Jung in Tongyeong, where he was shooting the drama series. Looking like he was still in character, Jung showed up with no makeup, wearing a monotone jacket and chinos. Here are excerpts from the interview.


Q. It was surprising to see that you are playing the role of Gang-chil. He is so different from the cool characters you usually play. Why did you choose to accept the role?

A. I thought it was for me as soon as I read the script. I’d been looking for this type of work, and it finally came to me.

There is a scene in “More Beautiful than a Flower” in which the dementia-stricken old mother dabs a povidone-iodine solution on her chest because she believes the red liquid will cure her broken heart.

I was deeply moved by the scene because it shows what the writer is like. The mother goes through all types of ups and downs in her life, but she still keeps her child in her heart, and it isn’t easy on her at all. I think Noh knows how to address things that never change in our lives, and with her stories, she also knows how to console people who are hurting. I always wanted to be part of her work but have never had the chance to do so. This character fell into my lap one day, whether by coincidence or destiny.

It must be hard for you to play Gang-chil. He’s such a complex character. How would you characterize him?

It’s hard to define him in just a few words. He was falsely accused of murder and had to spend 16 years behind bars. Those must have been difficult years for him. He could have developed into a bad man, but he still has a pure heart, which always keeps me thinking as I play the role. My conclusion about Gang-chil is that he looks rough and unsophisticated on the surface, but underneath, he is straightforward and honest.

It seems like you appear in almost every scene. Why is that?

I don’t think it’s because I’m a leading character but because we need to show what Gang-chil is like at the beginning of the drama. The drama talks about all different types of people. It’s about Gang-chil, his mother and Ji-na.

I feel like most of the dramas we see these days are pretty much the same in terms of storyline. They try to satisfy viewers by presenting all these glossy and materialistic things. But this drama is different.

You once played a character that is similar to Gang-chil in the 2003 film “Mutt Boy.” Your character in that film, Cheol-min, was a mentally challenged man who asks for food from his neighbors. How would you compare the two?

Gang-chil and Cheol-min have a few things in common. Both wear sweatpants and often argue with their fathers. But the public wasn’t ready to see me in that kind of role back then. I think there is a certain type of Jung Woo-sung that people want to see. But their expectations are not as high as they were a few years ago.

There were a lot of gruesome scenes in “Padam Padam,” like the one in which your nose is running all over the place when you’re on the gallows. Was that difficult to play?

If it were a different character, I would ask the director to shoot the scene again, but I’m okay with it because it’s Gang-chil. I even asked [my stylist] to bring me clothes from traditional markets. I hoped my clothes would look like they were handed down from somebody else. Sometimes I feel pressure when my fellow actors look great on screen, but an actor should look like his character. For this role, I don’t even comb my hair. It’s fairly comfortable for me to play Gang-chil because I can do whatever I want. I can wear anything, and I don’t care if my clothes get dirty.

“Padam Padam” is about a miraculous love. What is your definition of a miracle?

Every moment is a miracle to me. That’s because every day is a new day. I’m an atheist, but my motto is to be graceful in every moment. I think there is a fine line between life and death and between heaven and hell, depending on how you think.