All wrapped up for wedding day

All wrapped up for wedding day 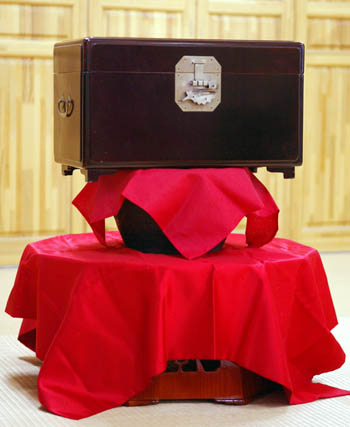 Until about a decade ago, a man wearing a dried squid mask, carrying a huge box and shouting “Buy a box! Box for sale!” was a unique spectacle in Korea.

The tradition was carried out by a groom and a bunch of his friends a few days before his wedding ceremony. The men would deliver the wedding ham (box), which contained yemul (gifts), from the bridegroom’s family to the bride’s family in exchange for allowing them to have the bride as their daughter-in-law.

The men wouldn’t hand the box over to the bride’s parents until a sum of money was offered by the bride’s female friends for each step the men took toward the bride’s house.

Back in the Joseon Dynasty, a servant usually carried the box, and its extravagant contents were meant as a symbol of a family’s power.

Today, the tradition has almost disappeared, and even when the ceremony is carried out, the bridegroom carries the box on his own - without causing any fuss.

The box is wrapped in yards of red fabric with blue embroidery. Red and blue represent the harmony of yin and yang and the harmony between the bride and the groom.

The gifts usually consist of jewelry - several necklaces, earrings and rings - as well as cosmetics, a hanbok (traditional attire) and a formal suit of clothes.

The box also contains five bags symbolizing luck. The bags come in different colors and contain various kinds of colored beans and different types of grains that have been placed in the east, west, north, south and center of the box. There are red beans to ward off evil, yellow beans to express hope for the daughter-in-law to be warmhearted, and millet and cotton seeds expressing the hope that the daughter-in-law will bear many children. Red and blue silk are put on top of the five bags, and each bag is tied with blue and red string.

When the box carrier arrives at the bride’s house, he wears a mask made of dried squid and is asked to crush a wooden bowl - both of which are meat to banish evil spirits. When the father of the bride receives the box, he puts it on top of layers of siru tteok (rice cake topped with red beans) that are covered by red cloth. The bride-to-be must stay in the room until the father is finished checking the contents of the box. When the whole process is finished, the bride’s family members and friends gather together with the groom’s friends, and they all have dinner and drinks to celebrate.