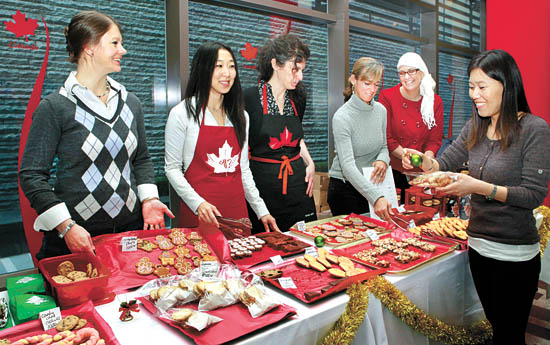 Members of the Canadian Women’s Club sell goods to raise funds at the Canadian Embassy in central Seoul, on Friday. The club raises money for two nonprofit organizations. By Park Sang-moon


Instead of holding a typical, traditional-style party with a dazzling Christmas tree and decorations, members of the Canadian Women’s Club have developed their own special way to mark the holiday - serving homemade dishes to a group of unwed single mothers.

The group has prepared the meals for Korean single mothers at Aeranwon, a local shelter in Seoul, once a month for the past three years.

“This Christmas, we will give them a traditional turkey dinner,” said Babara Bai, a Korean-Canadian who chairs the CWC. “We want them to feel loved and that someone cares for them.”

“Our main focus is to help our two charities,” Bai said. “We also do some fund-raising events and raise about 10 million won ($8,738) per year. Half of that goes to Aeranwon and the other goes to First Steps.”

For the CWC members, meeting and helping the young women is a meaningful experience.

“Although it’s hard to talk with them because most of our members can’t speak Korean, we also like to show our faces and be part of their lives as well,” Bai said. “It’s been really good to help Aeranwon because some of these girls are so young and they have nowhere to go.”

Bai also talked about the gap between Canada and Korea in the treatment of single mothers.

“Most of the women at Aeranwon came because of abuse from their families or abusive relationships,” she said. “In Korea, there is still prejudice against the women and children, and a lot of criticism of these girls. In Canada, however, it’s not that significant. I can’t say it’s normal, but it’s accepted. The women get financial support but more than that, they are not looked down upon.”

She said that social discrimination against the women is sometimes so strong that it leads them to put their babies up for adoption.

“Most Korean single mothers have nothing to build their lives with,” Bai said. “I think it’s not because they don’t love their children, but they give them up for adoption because they truly feel it is the best option so their children don’t live a hard life. But in Canada, the majority of single women keep their babies.”

Roughly 200,000 Korean children have been sent overseas for adoption over the past 60 years, with two out of three going to the United States.

According to Korean Women’s Development Institute, 89.3 percent of children adopted abroad are the children of unwed single mothers.

Bai said that these women need not only financial support, but social programs to help them raise their children by themselves.

“Aeranwon gives unwed single women a choice about whether to keep their babies and 80 percent of the women at Aeranwon raise their babies,” she said.

The facility also offers other programs for mothers who want to keep their babies, including one in which women get help with finishing their education up to a high school diploma so they can go on to vocational training, Bai said.

“We are moved by them because they are so brave,” she said. “I think more than government support, they need support from the community and their families.”