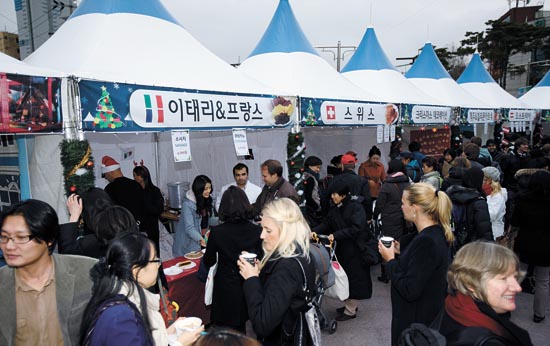 People browse an array of treats available at booths organized by seven European embassies at a three-day European Christmas Market in Seongbuk District on its opening day on Dec. 2. Provided by Seongbuk Global Village Center


The spicy scent of apple strudel and cinnamon wafted through the streets as the sun set on the evening of Dec. 2, at the site of the second Christmas market in Seongbuk District, north central Seoul.

A tall Christmas tree lit up Hangsung University Station square, drawing some 200 pedestrians of all ages to booths from seven European countries that were selling all sorts of delectable winter treats, including pea soup with bacon bits at a stand representing Amsterdam, crisp waffles at the German stand and juicy, sizzling handmade sausages at the Italian stand.

Following the success of last year’s German Christmas Market, Seongbuk Global Village Center organized a larger-scale European Christmas Market with the participation of seven embassies for three days from Dec. 2 to 4. The booths - represented by the Netherlands, Sweden, Italy, France, Finland, Austria and Germany - sold snacks, desserts and drinks representative of their countries, as well as handcrafted holiday ornaments.

Goo Jung-yeon, 24, a student at the Hankuk University of Foreign Studies, paused to examine a wooden soldier at a booth selling ornaments. “Last year, I studied abroad in Poland, and I came here to relive my memories of Europe,” she said nostalgically.

Huddled together against the brisk wind, a group of coworkers just out of the office shared a cup of chili con carne and a serving of rosti, a savory Swiss potato cake with bits of melted cheese covered with a fried egg.

Shoppers kept theirs hands warm with piping hot cups of gluhwein, or German mulled wine. The beverage is made of red wine heated with cloves, orange, lemon, sugar and other spices to give it a fruity and spicy kick.

Kim Young-bae, Seongbuk District head, said that the event has been so popular that “people from the neighborhood have been calling to ask when the German Christmas market was happening this year.”

The opening ceremony was held with representatives from the district and the seven embassies, and festive music filled the area as a group of yodelers lent their voices to the event. Meanwhile, children lined up to take a photo with a jolly Santa Claus, as the Finnish booth reminded the crowd that “Santa Claus is from Finland.”

According to representatives from the Dutch booth, which was offering waffle cookies and blocks of cheese, many people at the market that day were Korean nationals, especially at the end of the day when people were stopping by after work or school.

Market visitor Seok Jong-tak, 66, said he had been taking his daily stroll with his wife when they heard the yodeling and decided to stop by.

“These sausages are very savory but not salty at all, unlike Korean sausages,” he said as he relished a hot dog from the Italian booth. “Instead of all those rallies, we should have more events like this to showcase different cultures in Korea. And Koreans should also be able to show our culture and talents to other countries.”

The German ambassador to Korea, Hans-Ulrich Seidt, was also present at the market’s opening ceremony.

“Christmas is a very important season in Germany,” he said. “We were contacted by different embassies [after the German Market last year], so we decided to hold a European Market this year. Hopefully, next year we can have the first East Asian Christmas Market, maybe in a bigger venue, though we do want to keep it in Seongbuk District, where we started.”

The district is currently home to 37 embassies, according to Kim, the district head.