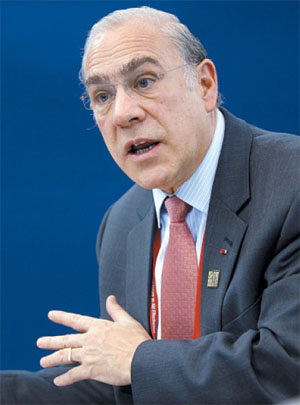 The aid forum in Busan earlier this month ended on a high note, with donor countries agreeing to pursue a more effective, inclusive aid partnership with recipient nations.

But challenges remain over how to coordinate those different voices, in particular for the OECD, the rich nations club, which initiated the aid effectiveness forums. The inclusion of rising world powers could weaken its hegemony, but the head of the OECD says that it welcomes the changes.

In an interview with the Korea JoongAng Daily on the final day of the Busan forum, Angel Gurria, the secretary general of the OECD, said the organization’s priority was not sticking to a power game but adapting.

“This is the reflection of the world; a shifting wealth process from the North to the South, from the West to the East, and this Busan forum is a mirror of the reality of the world,” he said. “Everybody is on board; this is what the world looks like.”

He said the OECD has worked with other organizations like the United Nations and the World Bank, and with emerging economies in the Middle East, North Africa and Latin America. He said it was willing to work with any credible partner that could work together for the bigger cause.

“Regardless of whether they are members of the OECD or not, that is not as important as the fact that we work with them,” he said.

Having more partners is imperative given the fast changes in the scope and pace of global issues, Gurria said, likening the spread of one country’s problems to another to a virus: “By the time you realize you have it [the virus], you have to cut off the arm to save the world,” he said.

The ongoing economic crisis is also making a dent in the global fight against poverty, he said. He said there were 14 million more unemployed in the OECD than before the crisis.

In addition to resolving the global economic crisis, Gurria said the OECD was trying to find sustainable growth engines for the world through education, innovation and green growth.

The Busan forum, which highlighted Korea’s transformation from an aid recipient to a donor, was the biggest international event Korea hosted after the G-20 Summit last year.

Gurria warned that Korea’s rise, which he called “the best success story ever,” could inflate the country’s ego but said that it was still important to stress the issue. “You’re getting spoiled by being told you are so successful, but you are. What else can we say?”

He said the current anti-FTA protests here will prove to be short-lived and Korea would soon reap the pact’s benefits. Citing his native country of Mexico, Gurria said that it benefited from Nafta and that it had laid the groundwork for growth.

“There were voices, complaining, saying no. Those are the same you see here. They fade away with time as evidence becomes very clear of the benefits,” he said. “If you gain access to a bigger market, a small country would have the enormous capacity for transformation. Really, the sky is limit.”