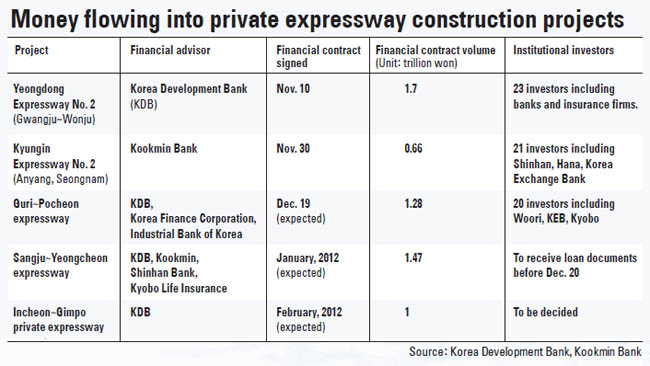 Seol Joo-suk, manager at the No. 2 Yeongdong Expressway Corporation, considers himself a near casualty of the 2008 global financial crisis.

His company signed an agreement with the government in May 2008 to build the No. 2 Yeongdong Expressway connecting Gwangju in Gyeonggi and Wonju in Gangwon.

Not long after, Lehman Brothers collapsed and investors in the project dried up. The local real estate market flattened out and construction firms were hesitant to take part in the project.

But in the last few months, 28 institutional investors including banks and insurance firms expressed an interest in taking part, and last month the project had 1.7 trillion won ($1.5 billion) in investment. Construction starts later this month.

“There were so many twists and turns,” said Seol. “The past three years have been just too long.”

Several private expressway projects that were in limbo for the past few years are getting back on track. And in a complete 180-degree turnaround, there’s now fierce competition among investors to participate in the projects.

An expressway to connect Guri and Pocheon also attracted more funding than the 1.28 trillion won it actually needed. The Korea Development Bank, which is the financial advisor, is currently trying to allot shares to investors that showed interest.

Private expressway projects have been in the doldrums because of the financial crisis and also because the government in 2006 abolished the policy of guaranteeing a minimum profit to the project organizer.

They’re hot now because banks and other finance companies are sitting on piles of cash they don’t know where to invest.

The real estate project financing market has shuddered to a standstill and the local stock market has been overly tumultuous. Interest on a three-year treasury bond is at the 3 percent level.

The profit rate of a private expressway project is around six percent per year and if the project is canceled, the government guarantees 100 percent of the principal.

“Private expressway projects are national projects so there is less risk and the profit is relatively higher than other investment projects,” said Park Dae-yang, an official from Allianz Life Insurance. “As for an insurance firm, investing in expressways is beneficial as they are long-term, stable projects.”

As a result of money pouring into expressway, an increasing number of large-scale projects - worth more than 1 trillion won - are being planned. Expressways to connect Sangju and Yeongcheon as well as Incheon and Gimpo are expected to get going early next year.