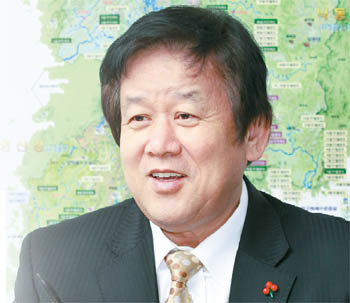 Shim Myung-pil, Minister of the Office of National River Restoration By Park Sang-moon

Thailand, which has been facing chronic flood problems, will be the first target for exportation of Korea’s four-rivers restoration project, said Shim Myung-pil, minister of the Office of National River Restoration.

“Though documentation work needs to be done, Thailand has been increasingly expressing its interest in Korea’s four-rivers restoration project,” Shim said in a recent interview with the Korea JoongAng Daily. “When Thailand’s former Prime Minister Thaksin Shinawatra visited Korea last month to have a tour [around the refurbished Han River in Yeoju, Gyeonggi], he expressed deep interest in the project.”

Thaksin’s visit came in the midst of the heavy flooding in Thailand, which has left hundreds of people dead and millions of homes devastated.

According to Shim, the Thai government is planning on injecting 33 trillion won ($28 billion) toward revamping its rivers as part of efforts to control flooding.

It remains to be seen what role Korea will be able to play in the Southeast Asian country’s project.

Shim, a 61-year-old expert in water resource development and a professor of engineering at Inha University, has been on a long journey to help accomplish the Lee Myung-bak administration’s ambitious four-rivers restoration project. The plan has received a lot of criticism from environmentalists and civic activists over its feasibility and impact on wildlife conservation efforts. Criticism aside, the project, which aims to upgrade the water quality and ecosystem of the country’s four rivers - the Han, Geum, Yeongsan and Nakdong - is now nearly complete.


Q. Along with Thailand, which other countries are expressing interest in the four-rivers restoration project?

A. With major construction slated to be completed by the year’s end, many foreign governments as well as international organizations are visiting the sites of the four-rivers restoration project. This week alone, officials from Austria and Cambodia have visited and are expected to make on-site visits. High-level government officials, policy makers and water resource development experts from various countries including Vietnam, Mongolia, China, Malaysia, Morocco, Uganda, Paraguay and Romania have visited the site. Korea even discussed ways to sign a memorandum of understanding with Morocco and Paraguay and the technical agreement is expected to be made early next year.

Later this year or early next year, we are planning on establishing practical cooperative measures with these countries, which have been expressing their intent to utilize the techniques of our restoration project to manage and control their own water resources. Upon visiting the sites, each of the countries have acknowledged the necessity of the project as it is future-oriented and promotes sustainable growth. The project itself allows a country to overcome floods and drought, improves water quality and boosts the regional economy.

Time-wise, it is likely that Thailand will be the first potential recipient of our four-rivers restoration technology. What attracted Thailand is the fact that Korea was able to complete this big project in a short time, and that’s what Thailand needs at the moment. It is crucial for Thailand to refurbish its rivers to protect itself against further flood damage.

Recently, however, questions about the safety of the construction of the four rivers have been raised, as there was dam leakage in nine of the 16 reservoirs on the Nakdong River section. What is your opinion on that?

The leaks in the nine reservoirs were very minor and a study by the Korea Infrastructure Safety & Technology Corporation showed that there are no serious threats to the overall structural safety. Also, experts said that there are no problems in terms of concrete curing flaws. There can be leaks in concrete structures like dams and tunnels, so the problem isn’t that major. But we do plan to repair the leaks by restoring the materials. This will not require additional government money because it will be done by construction firms. What we’re concerned with, though, is that there will be more doubts raised by opponents, which will look bad as we try to export our technology abroad. So for the national interest, we need objective and clear views and studies of the recent leaks.

What difficulties have you faced in participating in this project as the chief?

As the project itself is nearly complete - around 90 percent of total construction - there seems to be a more positive analysis of the project than in the past. But in the early stages of the project, there has been continuous opposition from several environmental groups. I tried to explain to them the exact purpose of the four-rivers restoration project, but they were reluctant to understand the project objectively and rationally. It was difficult persuading the opponents who stood against the project. The four rivers in Korea have been transformed and those who visit the sites will be able to break down the misunderstandings.

What about opposition from the political arena?

The four-rivers restoration project could solve fundamental problems such as flooding and drought and allow the country to utilize waterfronts that can be transformed into parks and bicycle paths. For the past three years the project itself has been politically debated and I find this too consuming. When the construction was going on, it was difficult to explain to the opposition parties the impact and actual results the project brings to the country. But since we’ve opened the reservoirs, many people are finding the project satisfactory. This summer, we had less damage from heavy rains because of the refurbished rivers. Also, the project allows Korea to secure 1.3 billion tons of water resources and the water supply rate has improved from the current 76 percent to up to 86 percent.