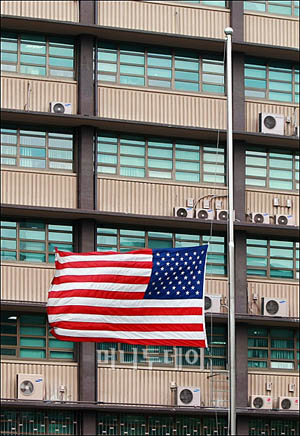 As the government struggles with U.S. calls to get tough on trade with Iran, the U.S. Embassy in Seoul contacted Korean companies doing business with Iran without consulting the Korean government, a source told the JoongAng Ilbo.

“Three economic-related officials of the U.S. Embassy visited three Korean companies that have deals or are planning to start business with Iran on Dec. 7 and asked them about their current or future business plans,” said the diplomatic source.

The visits came a day after Robert Einhorn, the U.S. State Department’s special adviser for nonproliferation and arms control, openly called for Korea to join the United States in applying tougher sanction against Iran at a press conference in Seoul.

The three companies include DSME E&R, an energy affiliate of Daewoo Shipbuilding & Marine Engineering, which is currently developing energy resources in such countries as Papua New Guinea and Indonesia.

“Officials of the companies said they told the U.S. Embassy officials that they are not considering new investments [in Iran] due to the high level of sanctions, but they remain bewildered [by the visits].”

The Ministry of Foreign Affairs and Trade is working to figure out what the U.S. Embassy was up to, officials said.

The U.S. Embassy denied that it was putting pressure on the Korean companies.

“It is in the same vein as explaining the new U.S. sanctions against Iran to Korean government agencies such as the Ministry of Foreign Affairs and Trade and the Ministry of Strategy and Finance,” said an official of the embassy. “It was to inform the three companies of the essence of the new sanctions.”

On Nov. 21, the United States announced toughened sanctions on Iran, particularly on its banking and energy sectors, and has called on its allies to follow suit. The sanctions were based on an IAEA report published earlier this month that concluded that Iran was actively pursuing nuclear weapons.

The Korean government plans to announce additional sanctions as early as this week. But, Seoul’s new sanctions will unlikely include a ban on crude oil imports, according to Seoul officials.