Chinese fishermen are led by Korean police officers to the Incheon Coast Guard office after they were arrested at a port in Incheon yesterday. A Korean Coast Guard officer was killed and another injured Monday when they were stabbed by a Chinese captain whose boat was stopped for suspected illegal fishing in Korean waters. By Kim Do-hoon

According to the Incheon Coast Guard’s West Regional Headquarters, it sought a warrant to detain the 42-year-old Chinese captain of seized vessel No. 15001 for multiple charges including murder, violent assault and trespassing into the EEZ. It also requested warrants against the remaining eight sailors for obstruction of government officials’ execution of official duty. 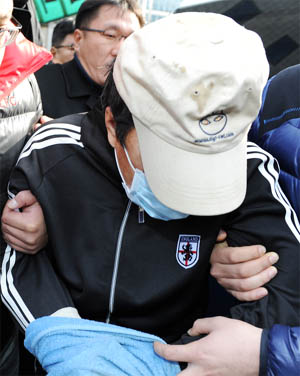 On Monday, a SWAT team member of the Incheon Coast Guard, Lee Cheong-ho, 41, was stabbed to death, and another officer, Lee Nak-hoon, 34, was also stabbed while they were conducting the operation in waters about 85 kilometers (52.8 miles) off Socheong Island.

The two officers were attacked by the Chinese captain when they broke through the locked door of the wheelhouse to take control of the ship. Both Lees were rushed to Inha University Hospital in Incheon, but Lee Cheong-ho didn’t survive.

“From the secured evidence, we presumed that Lee was stabbed by a knife when the captain resisted being apprehended,” Ahn Seong-sik, chief investigator for the Incheon Coast Guard, said during a press conference.

The Coast Guard said it secured two knives, each 12 centimeters long (4.72 inches), which it strongly presumed were used for stabbing the officers, and the captain’s bloodstained shirt inside the wheelhouse as evidence. The Coast Guard said that it sent Lee’s body to the National Forensic Service today to find the exact cause of death and also took the captain’s fingerprints to compare with the fingerprints they found on the knives. The captain denies stabbing the Korean officers. In the press conference, two members of the SWAT team described the situation to the Korean media.

Park said it was too dark to use firearms and they had difficulties aiming at the Chinese due to high waves.

“It was the strongest resistance ever,” Kang Hee-soo, another team member, said. “I think our government needs to handle it [illegal fishing] more decisively. We need to expand the number of officers and must not hesitate to use firearms if the resistance is violent in order to stop more Korean deaths from happening.”

Ahn said that the Coast Guard initially captured another Chinese vessel identified as No. 35430 and its 10 sailors, along with 15001. But ship 35430 escaped during the operation. He said that they then captured it later in the afternoon on Monday. The sailors of the second ship were transferred to the Incheon office and are currently under investigation.

Officer Lee Cheong-ho retired from the ROK Special Warfare Command in 1996 and joined the SWAT team of the Incheon Coast Guard in 1998 and contributed to protecting Korean waterways since then. Lee is survived by his wife, two sons and a daughter.