Fury at China over officer’s killing

Fury at China over officer’s killing 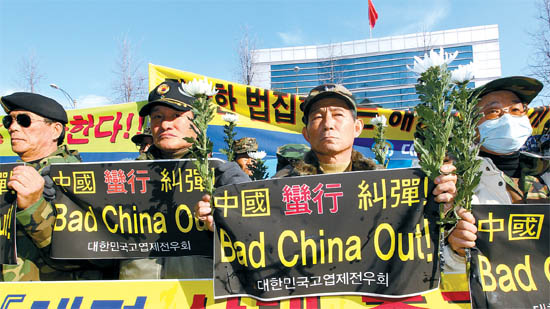 South Korean Vietnam War veterans rally to denounce the Chinese fisherman who fatally stabbed a Coast Guard officer when his boat was stopped for suspected illegal fishing in South Korean waters near the Chinese Embassy in Seoul yesterday. [YONHAP]


As public outrage grew over the brutal killing of a Coast Guard officer by an illegal Chinese fisherman and a defiant reaction from Beijing, Seoul is taking stronger action and using tougher rhetoric.

“The government is calling on the Chinese government to take measures to prevent such an incident from happening again in a manner that would be acceptable to our people,” Ministry of Foreign Affairs and Trade spokesman Cho Byung-jae told a media briefing yesterday. 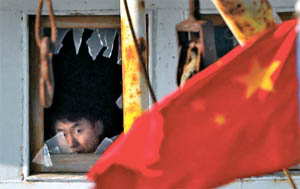 A protest outside the Chinese Embassy in Seoul turned violent with one man ramming his car three times into a Korean riot police bus guarding the embassy.

After being criticized for a tepid initial response, President Lee Myung-bak directed his cabinet to come up with strong responses, including beefing up the Coast Guard’s manpower and equipment even if it required a special budget, Park Jeong-ha, the Blue House spokesman, said.

The government plans to announce a set of measures to stop the illegal fishing by Chinese fishermen in Korean waters soon, a Seoul official said.

On Monday morning, one South Korean Coast Guard officer was stabbed to death and another wounded during an interception of a Chinese fishing boat 85 kilometers (53 miles) southwest of Socheong Island, Incheon, according to the Korean Coast Guard.

The Chinese captain of the 66-ton Chinese ship fatally stabbed Cpl. Lee Cheong-ho, 41, and injured Lee Nak-hoon, 34, when they tried to arrest him. The captain stabbed the two officers with a piece of broken glass or a metal weapon like a knife. Lee Cheong-ho died in a helicopter en route to a hospital.

The fatal encounter shocked the public, and many said it could have been prevented if the government had taken stiffer action after a similar case three years ago. In September 2008, one Korean Coast Guard officer was killed and six others injured during a crackdown on Chinese fishing vessels in the Yellow Sea, but the Chinese sailor suspected of the murder was repatriated to China months later without indictment in Korea. Korean Coast Guard data show more than 2,000 Chinese boats have been seized since 2006 for illegal fishing in Korean waters.

The Chinese government was unapologetic at first and called on Seoul to protect the rights of detained Chinese sailors at a Foreign Ministry briefing Monday. But it expressed regret yesterday afternoon, hours after being pressed by Seoul.

“The Chinese side regrets that the relevant incident caused the death of an ROK [Republic of Korea] Coast Guard member, which is an unfortunate event,” China’s Foreign Ministry spokesman Liu Weimin told reporters.

But state-run media in China ignored the story or defended the fishermen. Global Times, a Communist Party paper, said yesterday that evidence was lacking that the fishermen were doing anything illegal. It said the spot where the incident occurred was not within Korea’s exclusive economic zone so there was controversy over Korea’s crack down.

A Seoul official yesterday dismissed the claim as groundless.

The Global Times also conducted a poll of users on its Web site asking their views on “aggressive public opinions from Korea” about the incident. Seventy-six percent of the respondents said Korean public opinion was hard to accept.

In Korea, an Incheon man rammed his car three times into a Korean riot police bus guarding the Chinese Embassy in central Seoul.

The man, a 34-year-old surnamed Won, was attending a protest rally organized by a local civic group in front of the embassy to protest the violent incident. Won told police he wanted to join the rally and intended to park his car at the entrance of the embassy in a show of protest, but was enraged to see the police bus blocking the rallying group. He was arrested.

Political circles denounced China and called for a stronger response from Seoul.

“The Chinese government’s briefing on this incident had no words of solace or apology,” said ruling GNP floor leader Hwang Woo-yea at a party meeting yesterday, referring to China’s reaction Monday. “They should take effective measures on this matter.” He said the GNP will actively deal with diplomatic issues with China and if necessary have a party-government meeting on the issues.

Kim Jin-pyo, floor leader of the opposition Democratic Party, also called on the government to craft “special countermeasures” to secure the safety of the Korean Coast Guard. He urged the Chinese government to come up with preventive measures.

Prime Minister Kim Hwang-sik visited Inha Hospital in Incheon yesterday to pay respects to the murdered officer. Lee’s funeral service will be held at the Coast Guard pier in Incheon today. The Coast Guard decided to give a posthumous promotion to him.