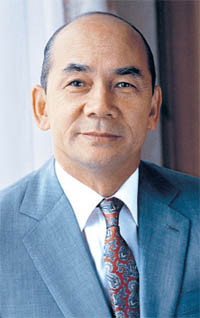 By making Korea a major steel manufacturer - which many experts said was more delusion than dream - Park became one of the giants in the country’s industrialization.

Park died yesterday at around 5:20 p.m., after developing an acute lung infection. Park had been suffering from side effects from an operation in the United States in 2001 to remove a tumor. He had been hospitalized since last week.

Born in Busan in 1927, Park was raised in Japan. During Korea’s second five-year economic plan, from 1967 to 1971, Park envisioned an integrated steel mill in Pohang, North Gyeongsang, which he built with the support of the government and Japan.

At the time, the World Bank described Park’s plan as “an overly ambitious project,” but Posco began production in 1972, just four years after the company’s inauguration in April 1968.

Under the slogan, “Make steel, serve the country,” Park turned the company into a leading steelmaker in a decade. The steelmaker is credited with helping the country become Asia’s fourth-largest economy, rising from the ashes of the Korean War.

Park entered politics in 1981 and was elected to the National Assembly as a member of the Democratic Justice Party. Since then, he served as a four-term lawmaker.

He and his top management at Posco were ousted by the Kim Young-sam administration in 1993 after Park was accused wrongly of money laundering and having a slush fund. Park was head of the company for 26 years.

Park went into exile in Japan for four years and returned to politics as a National Assembly member in 1997. He served as a prime minister in the Kim Dae-jung administration.

He was an honorary chairman of Posco since 2002.

Park had an operation at Severance Hospital on Nov. 11 to remove his left lung and seemed to be recovering, according to officials. In September, he was healthy enough to attend a banquet with retired executives from Posco.

“After the surgery, acute lung damage developed on his right lung which made it difficult and which caused the death,” Chang Joon, professor at Shinchon Severance Hospital’s pulmonology department, told the JoongAng Ilbo yesterday.

“I am very sorry to hear Park, who contributed much to the industrialization of the country, is no longer with us,” Lee said in a condolence message.

He is survived by a wife, one son and four daughters. Park’s body is at Sinchon Severance Hospital’s funeral hall and the funeral proceedings are being discussed by his family.