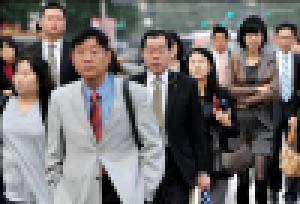 Of the nation’s 11.62 million two-parent households, 5.07 million, or 43.6 percent, had two incomes as of June, a higher percentage than households with one income, 42.3 percent or 4.91 million households. The remaining 14.1 percent were households in which both spouses were unemployed or not economically active.

A 2009 survey conducted by a nongovernmental organization had found that 40.1 percent of households had two incomes.

Dual-income households were most common among spouses in their 40s and 50s, the Statistics Korea survey showed.

Data also indicated that two-income households were more likely the bigger the household was.

Marriage was the No. 1 reason they cited for quitting their jobs at 47 percent, followed by child rearing at 28.7 percent and childbirth at 20 percent.