Can Kim save the Thunders?

Can Kim save the Thunders? 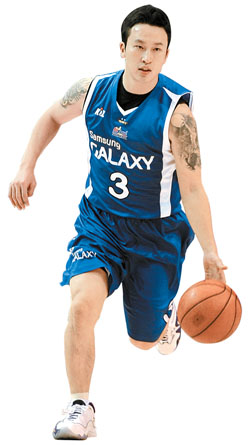 Will it be another loss or an opportunity to bounce back? The Seoul Samsung Thunders are looking to put an end to their 13-game losing streak tonight against the Changwon LG Sakers, hoping newly acquired point guard Kim Seung-hyun will help them improve.

The Thunders, who have made the playoffs the last nine seasons of the Korean Basketball League, are currently experiencing their worst season in franchise history, already surpassing the franchise losing record of eight consecutive games.

What’s more devastating is that the team hasn’t collected a single victory on their home court, Jamsil Gymnasium. In addition, the team sits last in the league with a record of four wins and 21 losses. To turn the tables, the Thunders, two-time KBL champions, are anxious for former All-Star point guard Kim Seung-hyun to regain his playing rhythm.

Kim, the first player in KBL history to win the Rookie of the Year and Most Valuable Player awards at the same time in 2001, returned to the court Dec. 7 against Incheon ET Land, ending his 641 days away from the basketball court.

Kim, who originally played for the Daegu Orions, now based in Goyang, Gyeonggi, was suspended for refusing to accept the league’s salary arbitration back in 2009.

Kim claimed there was a dual contract with the Orions and the issue went into a legal battle as he asked the team to pay the money stated in his deal in 2006.

After two trials, both sides reached a compromise last month with Kim giving up 1.2 billion won ($1 million) in exchange for a chance to play again and the Orions asking the KBL to lift the ban and trade him to another club.

On Dec. 2, Kim was finally traded with small forward Kim Dong-uk and wore the Thunders uniform, but so far he still needs time to gear up.

In his three games with the Thunders, Kim averaged 3.7 points and 4.7 assists, almost half of his career average of 12 points and 7.7 assists.

Pundits said during three games, Kim showed he still has his passing skills, but his stamina and speed was a big problem for the 33-year-old, especially when defending.

“I will keep putting Kim on the court so he can regain his game rhythm, but the problem is his stamina,” Thunders coach Kim Sang-jun said. “Other teammates have to fill the hole when Kim is defending.”

The Thunders expect the point guard to eventually perform like he did in the past and fill the void of injured Lee Jung-suk, who is out for the season due to a knee injury. However, things don’t look bright for the remaining 29 games as there are other problems for the Thunders to solve.

After sending Kim Dong-uk to the Orions in the trade deal, veteran forward Lee Kyu-sup was put on the disabled list last week with a knee injury, creating a void in the front court.

His absence is expected to be a big burden to foreign player Joe Ira Clark, who replaced the 222-centimeter (7 foot, 3 inch) center Peter John Ramos during the season, and another big man Lee Seung-jun.

The Thunders also have to find a solution for their turnovers. The team is currently committing 15.8 turnovers per game, worst among the 10 KBL clubs.