Don’t cry for me, Lee Ji-hoon

Don’t cry for me, Lee Ji-hoon

Jung Sun-ah, center, performs at a press preview of the musical “Evita” on Tuesday at the LG Arts Center in Yeoksam, southern Seoul. The production runs through Jan. 29. [NEWSIS]


After a five-year hiatus, the Tony Award-winning musical “Evita” returned to Korean theater on Friday. But while hit songs like “Don’t Cry for Me Argentina” have grown older, this rendition’s cast is studded with young Korean celebrities like Jung Sun-ah and Lee Ji-hoon. With this group, the production, which originally debuted in Seoul in 2006, hopes to attract a larger and broader audience.

The musical follows the life of Eva Peron, the political leader and first lady of Argentina in the mid-20th century. To capture the gravity of Peron’s rise and eventual death and its impact on Argentine society, the production team recruited veteran actors during the show’s original Korean run. But to give off a sharper contrast to the dominant political figure, director Lee Ji-na put together a new and much younger cast. Narrator Che Guevara, for example, is played by singer-turned-actor Lee Ji-hoon, 32.

Lee was a popular ballad singer in the late 1990s, but revived his career in 2009 through musical theater performances. This year, he took on the lead role in the musical “Wonhyo,” playing a Buddhist monk of the same name.

“Evita” is set to return to Broadway in April 2012 with Latin music prince Ricky Martin as Che Guevara, and Korean audiences will have the unique chance to compare how these two singer-turned-actors color the character differently.

The Korea JoongAng Daily talked with Lee in a group interview last month at Namsan Creative Center, where the cast has practiced:


Q. You are now actively involved in musical productions. Has your previous experience as a singer helped you in any way in theater? 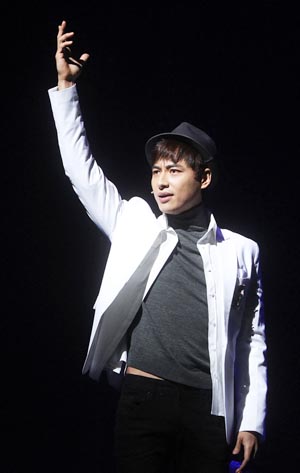 A. Actually, I had to relearn vocalization methods for singing musical numbers. I also had to learn how to do the tango and the waltz, which I never needed for my singing career. There is one song called “The Lady’s Got Potential,” which was not included in the production in 2006, and this song - with a rock music base - shows Che’s defiant character.

Why do you think theater was the right step for you?

The media environment is changing too fast. It is now difficult to communicate with fans in the fast-paced world of broadcast media, so I think theater is a way for me to have more intimate contact with people.

Che Guevara is quite different from the roles you’ve taken in TV productions. You’ve mostly played cheerful and lively characters. How do you like this recent project?

Television producers don’t often take risks when giving me different characters to play. So I’ve kept the image I’ve established on TV whether I like it or not. But I’ve met many musical theater directors and producers who are willing to challenge me with more masculine and rebellious characters. That’s why I love being on stage, so that I can express the various personalities and faces I have.

Do you have any pre-performance rituals?

I always wear two socks. If my feet feel lose in my shoes, I start to feel strange.