The SongEun Art and Cultural Foundation, which is part of the energy business group Samtan, recently started an exhibition of the four finalists for its 11th annual Art Award at its SongEun Art Space gallery in southern Seoul.

Among the four finalists, Han Kyung-woo reveals how human eyes are vulnerable to optical tricks with his installations and questions the true nature of the objects we see. Chung Hee-seung displays photos that capture undefinable moments. They look ordinary but surreal at the same time.

Jang Sun-kyoung’s work is centered on the “copyleft” movement, a play on the word “copyright,” with her container “ark” where an imaginary anarchic city without intellectual property laws is planned. The last finalist is Lee Won-ho, who erases the lines of tennis courts or soccer fields by gathering the white powder of the lines. Then he makes a small field composed of the powder in the gallery, questioning the lines’ authority.

The exhibition is part of the new selection process for the SongEun Art Award. Before the end of the group exhibition, one winner will be selected and given the opportunity to mount a solo show at the gallery and will receive 20 million won ($17,300) in prize money. The other three will receive 10 million won each. 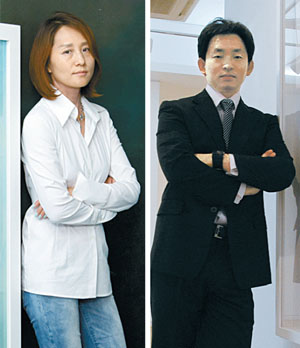 Meanwhile, another art patron, the Ilwoo Foundation under Hanjin Group with Korean Air as its arm, announced two “photographers of the year” last week. They are Yoo Hyun-mi, 43, for the Publishing Award and Choi Young-main, 46, for the Exhibition Award.

Yoo has won the right to publish a collection of her photos with famous German art publisher Hatje Cantz. She will also hold a solo show at the foundation’s gallery, Ilwoo Space, in central Seoul. Choi also won a solo exhibition at the gallery in addition to prize money. The honor has risen quickly to become the most-desired photography award among local photographers.