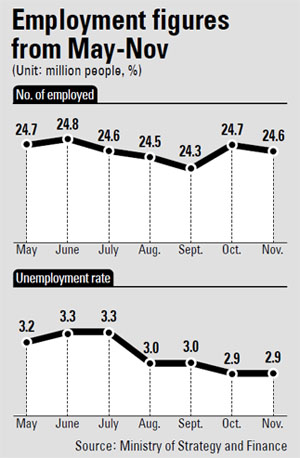 Korea’s unemployment rate remained unchanged in November from a month earlier, an indication that the labor market is managing to weather the storm brought on by sluggish economic growth, a report showed yesterday.

According to the Ministry of Strategy and Finance and the Ministry of Employment and Labor, the country’s jobless rate held steady at 2.9 percent in November, and improved slightly from 3 percent during the same period one year earlier. The report showed that the economy gained 479,000 more jobs last month compared to November 2010, with the number of people employed standing at 24.58 million.

More jobs were created in sectors such as social welfare, health, transportation and retail, which offset losses in manufacturing and education-related services, the office said in a statement. Social welfare and health services added 113,000 more jobs last month, with retail and wholesale businesses contributing 109,000 positions. The service sector as a whole had 525,000 more jobs last month than the same sector a year earlier, with public sector positions decreasing as Seoul cut back on spending.

Meanwhile, the report also showed that in the first 11 months of the year, an average of 413,000 jobs were created per month. 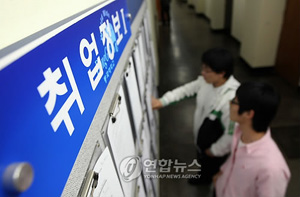 “Unless there is a sharp drop in employment figures this month, the government’s annual target of generating at least 400,000 new jobs per month this year can be achieved,” Statistics Korea said. “This would be the highest target reached since the 420,000 jobs created per month in 2004.”

This view was echoed by the Finance Ministry, which predicted more jobs may be created in December on the back of rising demand for workers in the country’s service industry. But it added that the number will probably fall shy of the 455,000 new positions created in the final month of 2010.

The report comes as the government has been pushing to boost employment in the private sector in an effort to revive flagging domestic demand and lay the foundation for sustained economic growth in the face of persistent global uncertainties.

Government ministries, including the Ministry of Knowledge Economy, have been stressing that the country’s service industry should be targeted, as it has the potential to create more job opportunities than other sectors dominated by machines and technology.

The report, meanwhile, said the number of people who were unable to find a job despite their efforts to do so declined to 730,000 last month from 737,000 a year earlier.