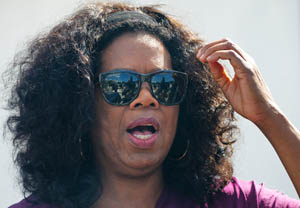 PORT-AU-PRINCE, Haiti - Oprah Winfrey toured an encampment for Haitians displaced by a massive 2010 earthquake under tight security Monday, with a local photographer detained for about 90 minutes as he tried to cover the event.

Winfrey, escorted by security guards, walked among the tents with the actor Sean Penn, who helped create an aid group that provides support to people in the encampment. Winfrey said Penn’s efforts will be featured in an upcoming program on her Oprah Winfrey Network.

“This is part of the next chapter, going around the world to see interesting and fascinating cases of profound examples of what can be done to make a difference in the world,” Winfrey told reporters at the encampment.

Penn said he welcomed the interest of “the world’s most elegant woman” and expected it would help Haiti. The camp where his group works was built on a former country club golf course and has been home to thousands of people since the earthquake left much of the Haitian capital in ruins.

“Everybody who has spent time in Haiti knows how important it is for the world to see what is going on here. .?.?. We really appreciate that she’s here with us,” Penn said.

Winfrey came to Haiti on Sunday under tight security. Guards and police cleared the airport so journalists could not film her arrival.

Her representatives have not provided any details about her itinerary, though President Michel Martelly said he intended to meet with her.

Photographer Lionel Lafortune, who was among several journalists trying to cover Winfrey, was detained by a guard as he entered the encampment and took photos.

An Associated Press journalist saw a private security guard grab Lafortune, who works for the newspaper Haiti Progress, and drag him into a small police station at the camp, where officers demanded that he erase the memory card from his camera and refused to let him leave.

The photographer declined to delete the photo, and police continued to hold him until a more senior official, Police Inspector Jean-Lionel Aurelien, arrived and ordered him released, saying, “Journalists have the right to work without intimidation.”