Donald wins player of the year

Donald wins player of the year 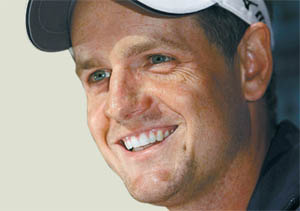 Luke Donald attends a news conference before the Australian Masters at the Victoria Golf Club in Melbourne yesterday. [REUTERS/YONHAP]

JACKSONVILLE, Florida - Already No. 1 in the world, Luke Donald now is No. 1 in the eyes of PGA Tour players.

Donald capped off a sensational season Tuesday by winning PGA Tour player of the year, the most significant of the postseason awards because it’s a vote of the players. He became the first British player to win the award since it began in 1990.

“It’s a great honor to cap off what has been an amazing year for me,’’ Donald said from the Australian Masters in Melbourne. “Thank you to all the players for their votes. There was obviously some other worthy people to vote for, and I guess my overall consistency and having to go to Disney and win, and win the money list like I did, was a deciding factor. I feel very honored at the moment.’’

Donald won the award over Keegan Bradley, Bill Haas, Webb Simpson and Nick Watney. An official familiar with the results described it as a landslide. The official spoke on condition of anonymity because the tour does not release the votes or the order in which the players finished. Bradley, whose two wins included the PGA Championship, was voted rookie of the year.

It was only the fifth time in the last two decades that the PGA Tour player of the year did not win a major. Even so, Donald made a compelling case, especially at the end of the year.

He won two tournaments, as much as anyone else this year. He won the Vardon Trophy for the lowest adjusted scoring average. He had top 10s in 14 of the 19 tournaments he played, a rate of consistency only Tiger Woods has known in this era. But it still came down to the end of the year.

Simpson won twice in the last three months of the season, and entered the McGladrey Classic to try to capture the money title. He took over the lead with his runner-up finish, and Donald decided to enter the season finale at Disney.

Needing nothing short of a win, the 34-year-old from England turned in one of the best performances of the year. Donald began the back nine of the final round with six straight birdies and closed with a 64 to make up a five-shot deficit and win by two.

While only his tour record counted for this award, Donald last week became the first player to win the money title on the PGA Tour and European Tour in the same season. He won twice in Europe this year, including Europe’s flagship event at Wentworth when he beat Lee Westwood in a playoff to take over as No. 1 in the world. Donald expanded his lead in the world ranking the final seven months of the year.

He achieved all this with moderate length off the tee, demonstrating that while power helps, it’s not the only way in golf.

“I’ve done a lot of things this year that probably not a lot of people would have given me much chance of doing,’’ Donald said. “I think in the last 10 or 20 years, the power game has really taken control of golf. But I think I’ve been a little bit of a breath of fresh air knowing that’s not the only way you can be successful. Through a good short game, good putting, managing your game, you can be successful in other ways.’’

Still left to prove is winning a major. Woods in 2009 and 2003, Greg Norman in 1995 and Nick Price in 1993 were the only players in the last 20 years to have won PGA Tour player of the year without capturing a major that year. Donald tied for fourth in the Masters for his best finish in a major.