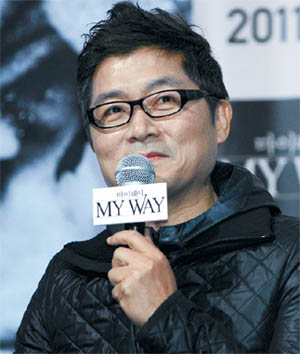 Kang Je-kyu returns to the director’s chair with “My Way,” which opens next week. It’s his second war film after “Taegukgi: Brotherhood of War” (2004). [YONHAP]

Filmmaker Kang Je-kyu publicly told the media that he wouldn’t make a war film again after he finished the 2004 hit “Taegukgi: Brotherhood of War.” But Kang changed his mind and returns to the director’s chair with another war film, “My Way,” which has a much larger budget of 28 billion won ($24.3 million), the highest in Korean film history, and far more crew members at about 170.

“It’s very hard to make this type of genre film,” Kang told the media on Tuesday when asked what made him decide to do another war film. Since “Taegukgi,” Kang has mainly worked as a producer.

“It [war film] tortures you physically and mentally. You need to recreate the past without distorting it. In addition to that, it’s depressing to make [tragic war stories] into films.”

The idea for “My Way” came from a television documentary about the tumultuous life of a man who was conscripted into Japan’s Kwantung Army and forced to fight for three countries - Japan, the Soviet Union and Germany - during World War II. Perhaps coincidentally, Kang decided to make “Taegukgi” after he watched a television documentary.

“In fact, I found out about this doomed man through a screenplay written by Kim Byung-in. I knew the story was based on truth, but it was too shocking to believe. I had no intention to make this film because I was working on a different film back then, though,” Kang said.

The two-part television documentary “Korean in Normandy” aired on SBS in 2005, however, and changed Kang’s mind. “I watched it, and it touched my heart. The story came to me miraculously.”

With Kang taking the lead, Korean actor Jang Dong-gun and Japanese actor Joe Odagiri joined as the two main characters. They are dragged from Korea to the Soviet Union to Germany to Normandy against their will in the film.

But the most challenging part for Kang was bringing the well-known Normandy landing to life. “There are many famous films featuring the Normandy landing, so we had to find a way to differentiate ours from others,” Kang said. “We made small teams for the Normandy scene. A number of producers and artists prepared for the scene in Latvia while we were shooting in Korea.

“If you ask me the difference between other Normandy landings and ours, other films focus on Allied forces, but my focus was on Asian soldiers wearing uniforms for another country.”


Based on the true story from the Korean soldier, the film adds fictional elements by creating a rivalry between the Korean and Japanese characters. Jun-sik (played by Jang) and Tatsuo (played by Odagiri) are both top marathoners in their country, but they become archrivals when Tatsuo moves to Korea during Japanese colonial rule. The film weaves facts and fiction using Korean marathoner Sohn Kee-chung. He won a gold medal in the 1936 Summer Olympics in Berlin as a member of the Japanese delegation, but a picture of him on the podium during the medal ceremony showing that he covered the Japanese national flag on his chest is still remembered by many. The film takes liberties with this moment. In the film, after Sohn wins the gold medal, Korean marathoners are not allowed to participate in the Olympics. But Jun-sik gets a little help from Sohn and the marathon elevates tension between Jun-sik and Tatsuo.

It’s Jang’s second time to appear in a war film after “Taegukgi,” but this character is much different. In “Taegukgi,” Jang’s character goes mad as the war proceeds, but Jun-sik remains the same as his fellow soldiers go crazy.

“Everyone around him changes due to the war, but Jun-sik is the only one who keeps his faith,” Jang said.

“It was quite hard to understand him, and I wasn’t sure about playing him. Everything changes so fast, but he remains unchanged. But the director assured me that Jun-sik is the one who changes people around him,” Jang said.

“I had an impression that Jun-sik is a persona of Kang. Kang has his own faith. He always dreams and realizes his dream finally.”

On the other hand, Odagiri’s character falls into insanity and savagery at one point, but he later undergoes a major change. It was challenging for Odagiri to understand his character. It eventually made him knock on Kang’s door with questions.

“I had to discuss the character with Kang often. But I also loved hanging out in his room because he had good wine and music,” said Odagiri, with a grin on his face.

Chinese actress Fan Bingbing also appears in the film as a Chinese female warrior. Her part is short but leaves a strong impression. “Kang came to me with a screenplay and said I was the only actress he contacted for the role. I instantly said ‘yes’ and that’s how I came to work with him.”

Kang has directed “The Gingko Bed” (1996), “Shiri” (1998) and “Taegukgi: The Brotherhood of War,” which are all said to have changed the landscape of Korean film.

Most actors speak Japanese, including Jang, and the running time is 145 minutes.

“My Way” opens next Wednesday at theaters nationwide.