The funk-soul brothers of Mamas Gun

The funk-soul brothers of Mamas Gun 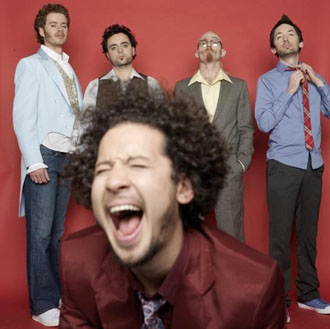 When British soul-funk band Mamas Gun [sic] released its maiden album “Routes to Riches” in 2009, no one anticipated the five-member group’s sudden rise to fame in Asia. Seemingly overnight, radio hit “House on a Hill” climbed the ranks of Japanese music charts and the band found itself playing at the 2010 Japanese Billboard Awards in Tokyo.

Frontman Andy Platt’s mellifluous falsetto and Mamas Gun’s upbeat funk resonated throughout the region. Just one year later, the band performed for the first time in Korea at the Pentaport Rock Festival in Incheon. “I was absolutely blown away by the love shown to us by the fans,” guitarist Terry Lewis said in an exclusive interview with the Korea JoongAng Daily.

Months later, the band was back in Korea, playing two shows at Hongdae’s V-Hall in Seoul on Dec. 1 and 2. The tightly packed venue, tucked away in a basement near the heart of the capital’s university nightlife, allowed for a much more intimate experience.

In the middle of the show, the audience unexpectedly launched hundreds of paper airplanes at the stage. “That was such an inclusive, singular, communal moment,” Andy said. “That will stay with me forever.”


Q. The group has become an instant hit in Asia, especially in Japan. Did you anticipate this? Why do you think your music resonates so well in this part of the world?

Andy: No one could have anticipated the way Asia has reacted to Mamas Gun: with open arms. To quote our live sound engineer Douglas Hunt, I think it’s a case of people hearing the music for what it is and not necessarily everything else surrounding it, like the hype, fads, scenes, fashions or associations with certain people. We are simply five guys thriving and enjoying every second of what we do and trying to make a connection with those willing to listen.

What are your thoughts on the Korean music scene? How did playing the V-Hall compare to the Pentaport Music Festival?

Rex: Pentaport was great, of course. It was our very first taste of a Korean audience and such a wonderful surprise to experience how well we were received. However, the V-Hall show was totally unforgettable. In a way it felt like more of a homecoming as it was our second time in Korea. The paper plane moment will be with me for my whole life.

Were you guys surprised by the paper airplanes launched toward the stage during the concert?

Andy: The moment the audience launched those paper planes, it triggered a huge surge of euphoria within me to the extent that I couldn’t stop myself from leaping around the stage like a kangaroo.

What do you guys think of K-pop? Who’s your favorite Korean pop artist?

Jack: Of course we know how huge K-pop has become, not only in Korea, but globally it’s massive. Having been to Korea twice now, Mamas Gun knows how great Korea is and how lovely the people are, so exporting K-pop around the world can only be a good thing in terms of letting other people see that too.

Obviously there’s much more to Korean culture than just K-pop, but if it gets people interested to find out more, then everyone’s a winner. I’ve heard a little bit of artists such as Girls’ Generation, KARA and BEAST. It’s all a bit of a mystery to me still. I’m looking for recommendations though.

What does Rex “The Professor” Horan sound like offstage?

Rex: Off stage, The Professor sounds like your favorite uncle who’s telling you shaggy dog stories. “Are they true?” you ask. “Never let the truth get in the way of a good story,” he answers. “Tell me another one,” you demand. “Gladly,” he obliges.

What surprised you all the most during your Korean tour? Are you fans of soju?

Terry: I was absolutely blown away by the love shown to us by the fans. Their level of focus and sensitivity during the show was incredible.

They respond to every little nuance in the performance whether it be things that happen musically, or dance moves, or anything at all. Offstage they made us feel very special too and it was great to meet fans and hang out after shows. We loved the gifts that were made for us, which included Mamas Gun dolls and Korean name badges.

We’ve been lucky to try lots of Korean food. We’re not the kind of band that comes to Asia and eats pizza. I’d say Korean BBQ is a strong favorite except for Rex, who’s a vegetarian. Rex seems to like all the interesting vegetables Korea has to offer. And as for soju, of course we are fans - who isn’t?

If you guys could share the stage with one artist or group, dead or alive, who would it be?

Jack: Wow, that’s tough. It could be Michael Jackson, Stevie Wonder, James Brown or even Frank Sinatra, but for me I think it would have to be Donny Hathaway. Just to be on stage with him, listening to him sing - that would do it for me.

Terry: James Brown or Michael Jackson? Are you crazy? How in the world can you ask me this! These are two very different but equally influential artists. If you pushed me to answer, I’d say James Brown, just because he is so at the root of what I like and what I do. Without his influence would the Jackson 5 ever even have existed?

Dave: Definitely the 1980s. Come on, they don’t even compare.