The heat is off in Seoul as power crunch feared

The heat is off in Seoul as power crunch feared 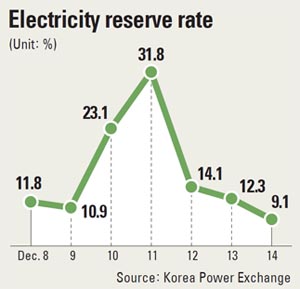 It’s going to be a chilly winter - even indoors - as offices, department stores, major financial institutions and commercial buildings started cutting down on their heating during peak hours in line with government requests to trim electricity usage.

The government and power companies are worried about a squeeze in power supply because people are using more electricity to stay warm and the power supply has been at least temporarily disrupted by the shutdown of a nuclear reactor.

Yesterday, the government started conservation measures for major power users and even shops and restaurants that have neon signs. The signs have to be turned off during peak hours from 10:30 a.m. to 12:00 p.m. and 5 to 7 p.m. Violators are subject to a fine of up to 3 million won ($2,580).

The Ministry of Knowledge Economy asked buildings and industrial plants that use more than 1,000 kilowatts of electricity to cut electricity use by 10 percent during the peak hours.

As part of the conservation plan, the Bank of Korea and other financial institutions said yesterday they would turn off their buildings’ heat during the peak hours. The central bank said if its electricity usage still surpasses the limit, it would turn off one third of the lights.

“We ran a few tests and realized that electricity usage reaches 90 percent of last year unless we stop heating the buildings,” said a central bank employee. “Lowering indoor temperatures was not enough so we decided to turn heaters off all together.”

The Financial Supervisory Service also said it would closely watch electricity usage in its offices and turn off the heat if necessary.

KB Financial Group said it would turn off heaters at its Myeong-dong central branch and its headquarters and data center in Yeouido, western Seoul.

Hana Bank said it would turn off neon signs during peak hours and banned the use of personal heaters by employees.

Department stores including Lotte and Shinsegae also started reducing the use of outdoor Christmas decorations yesterday. They are turning on the Christmas lights over one hour later than usual, at 7 p.m., to avoid peak hours and switching them off an hour earlier, at 11 p.m.

“By turning off Christmas lights, we will be able to save 7,700 kilowatts for three months at the central store and reduce 10 percent of electricity usage compared to last year,” a Lotte Department Store employee said.

Shinsegae Department Store set its indoor temperature at 20 degrees Celsius (68 degrees Fahrenheit) or below. Hyundai Department Store said it turned off outdoor illuminations at 9 p.m., 30 minutes after the store closed.

The three department stores will continue to limit electricity usage till February.

Meanwhile, the Ministry of Knowledge Economy held an emergency meeting yesterday to check the safety of two nuclear reactors shut down earlier this week and also to check the possibility of power shortages caused by the reactors.

The ministry said there was no risk that the suspension of the nuclear reactors would trigger a nationwide blackout, but the start of the winter peak season could pose unanticipated risks.

The Uljin Unit-1 nuclear reactor resumed operation early yesterday morning after it was shut down Tuesday night due to problems with water pumps. The nuclear safety committee said it confirmed that it is safe to resume operation. The reactor reached full capacity yesterday afternoon.

However, the Kori Unit-3 reactor is still not operating after it was shut down on Wednesday. The ministry said the Kori reactor will resume operation after cables are restored.

“The Uljin reactor incident would not have happened if an expert had supervised the work as required by regulations,” Minister of Knowledge Economy Hong Suk-woo said in the meeting. “We will move toward a system where all mistakes, except the ones that are inevitable, are subject to strict disciplinary action.”

Kepco said the electricity reserve rate remained well above 5 million kilowatts despite the suspension of the two nuclear reactors earlier this week. It is well over 4 million kilowatts, a minimum that is considered safe.

The conservation measures on companies and buildings will be enforced until the end of the winter peak season on Feb. 29.